Oh I was dreading this day, I even imagined it in horror before Sam was born. How would I manage with TWO children???

It wasn't quite as bad as I had imagined. Somethings could have gone better but let's just say it helped to have a minivan, those things really are designed to get kids in and out efficiently.

First I carried Sam in this Baby Bjorn front pack and he liked it! 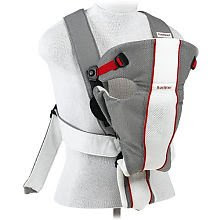 I did this so I could have arms free to catch Charlotte in case she made a break for it. I've found that Sam is an extremely jumpy baby when he has gas, today he nearly did a backwards dive while I had one arm firmly around his back - the time for swim diving is in 10+ years son, until then please settle down!

Charlotte walked with us to the car without any problems. I was able to load Charlotte into the van while Sam stayed snug and secure against my chest. If I'd put Sam in first it would give Charlotte the opportunity to run around the van and out of sight.

I kept the front pack strapped to my chest and just seat belted around it to save time upon exiting.

First stop - Walgreens - 1 mile up the road. I kept the air conditioning running while reaching back to unhook Sam and reposition him in the carrier. I unhooked Charlotte and let her run around in the minivan and just pulled her out of whatever door she ended up next to.

Inside Walgreens we got Infant Mylicon and Gummi Bears (bribery for Charlotte - I'll explain later). Charlotte threw herself on the floor mid-way through the store but it wasn't a big deal since the store was basically empty. She eventually caught up with us.

Second stop - Chick Fil A drive through - Charlotte and I ate all the fries and milkshake while driving to Starbucks for a latte (my treat).

Upon coming home I managed to lose my grip on Charlotte and she ran around the van and into the neighbors driveway, I screamed at her to not run off in a parking lot and she cried, made me carry her. This might have gone alot smoother if I had less things to carry in the other hand. Next trip out will plan to just have Sam, purse and firm grip on Charlotte after unhooking her.

Oh - and most importantly, Sam slept the entire one hour trip!
Posted by R. Molder at 2:56 PM

It's hard at first but you will find your groove!

AWESOME!! Good for you for making it work! It gets easier! You made my mouth water so bad with your mention of an off limits to me place to eat that I LOVE!!!

Like I said, Kids are kids and they are unpredictable. You just never know. Sounds like a typical day with two. Just imagine three and the middle child wants to run away. Haha! Like Rumour Miller said, you will find your groove. You are a brave momma going out this soon all alone with two little ones.