I stayed home to feed the baby while the family left for Sunday school.  While feeding her I decided to get caught up on some bills and in doing so, realized our health insurance had been canceled by a misunderstanding with the Maryland Exchange.  I was paralyzed with shock and numbly gathered baby and headed to church.  As I pulled into the parking lot dread settled over me like a smothering blanket.  I felt like I couldn’t breathe.  My dad died 11 years ago so I kept thinking why bother even going inside, I don’t have a dad.  This service is just going to be about dads and everyone will be super happy and I’ll get even more depressed.  But a small voice said just go, you’re already here.  Just go inside.


The service ended up being the most healing and precious time I’ve ever spent inside a church.  Someone, I don’t know who, had arranged to play a recording of a song that my dad was well known for singing.  I was stunned to hear his voice.  His song was “Jesus is more than enough”.  More than enough to handle my insurance debacle?  More than enough to handle my anxiety over my trip to Florida?  To cover me while driving in Florida on the crazy busy 95 highway with 6 lanes when I’ve gotten used to 2 lanes?


I left church feeling comforted and my anxiety lifted to where I felt like I could breathe again. 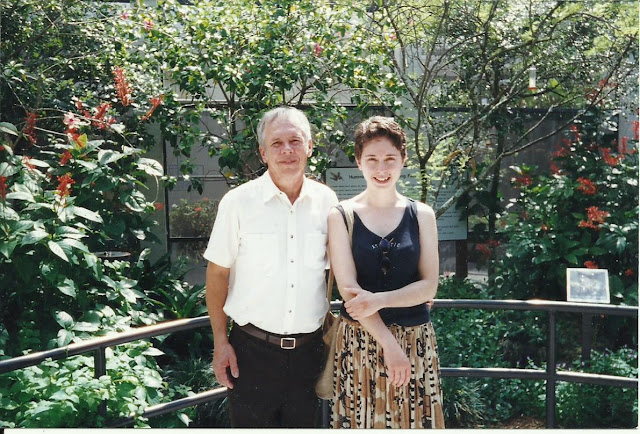 Every once in awhile there are just so many headlines that jump out as historic and downright crazy at the same time that I thought today's mix was worth listing out - for my own reference later in life when I say to myself - oh yeah way back then on June 26, 2015.

Let's start with SCOTUS - I didn't know what this stood for until today.  I've heard POTUS used more frequently this year and even FLOTUS but SCOTUS had me a bit confused so it took me a tad bit longer to figure out what was going on today then probably everyone else.  Apparently it means Supreme Court of the United States, because just saying Supreme Court takes way too long to type.  Anyway, they finally got around to making the decision for same-sex couples to marry.  It's historic and that's all I'm going to say about that.

The next announcement is that Bristal Palin is pregnant, out of wedlock, again.  Who cares?  She's apologizing to her family and I just don't get it.  She's an adult now.  It was like a big deal when she was a teenager and her mom was running for vice president but no one cares now.

Then we find out the escaped convict who had one of the most interesting escapes in ages got shot and killed.  I want to know why?  But the article just says he's dead.  Did he fight back?  I want details!  It's like a live action movie with no information.  Boring.

Lastly, Trump continues his crazy attack on all immigrants and even goes so far as to say he will shut down all trade with Mexico to bring back jobs to the US.  He would make the worst public relations president ever.  It's so much fun to watch the crazy unfold and he's completely unapologetic.  In fact when challenged, he gets even more aggressive!  Could you imagine being his handler?
Posted by R. Molder at 10:55 PM No comments:

I don't get excited about Father's Day because my dad passed away in 2004 and I really miss him.  This year I was extra stressed because of an upcoming business trip, my 2nd since having baby.  I'm so out of my traveling routine.  I get worried about having dishes done, laundry folded and put away, bills finished because if I die while I'm away I don't want anyone to have to deal with any urgent bill issues right away.  I get a little over dramatic sometimes in imagining the worst.  Saturday was like that.  And Saturday is my husband's day off to mow the lawn and get stuff done around the house but I guess he could see I was not doing well.  He stopped what he was doing and told me he was going to spend the day with us.  And that's the dad I hope my son is some day.  A man who will give up his only day off to make sure his wife has less anxiety.  A man who will try really hard to make her laugh when she's got that worry wrinkle on her forehead.

I got my packing done early so we went to a movie.  It was really nice to do something as a family since I'm to be gone for 3 days.

So Father's day came the next day and I thought to myself, I've picked the best father I could have picked for my kids.  He's selfless and caring.  I only hope we give him enough love in return.
Posted by R. Molder at 10:58 PM No comments:

Hard to believe we tumbled out of our minivan and truck/Filmore trailer 2 years ago to relocate in Hagerstown, MD.  I'm astonished to see I never blogged about the move although I did tweet about it here.  Check out this awesome trailer my husband made to move our stuff. 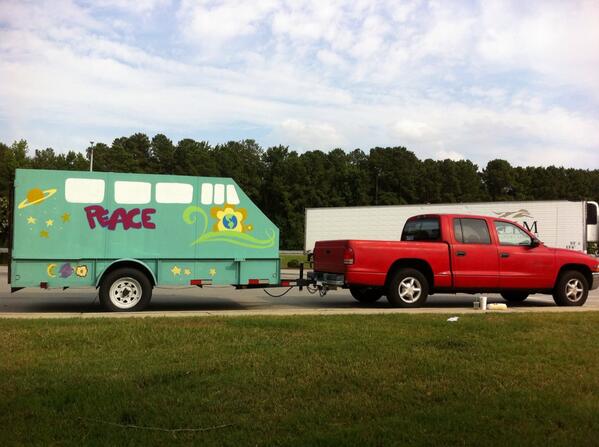 Filmore has become a shed since moving to Maryland.

It's been wonderful to live near family and work from home.  I treasure these two years and after seeing the news about these poor young kids getting bit by sharks in waste deep water I don't even miss the ocean.  When we lived in FL, I'd get heart palpitations every time I took our crew to the beach because how fast they are to want to jump right in and they want you to go out far into the water and keep them safe on a boogie board.  Not fun at all!  So no, there's absolutely nothing about Florida that I miss at this point.  Even winter has not deterred me from enjoying our new life in Maryland.
Posted by R. Molder at 2:01 PM No comments:

Working With Babies is Impossible

6:55 - it's way too late to be still working but I'm not done and no one has come to deliver a baby.  It's surprisingly quiet, I'll just finish these last few concepts that have been sitting in my inbox for 3 days.

7:04 - a baby is dropped into my lap with the statement "I'm sorry dear but I can't make dinner, she's being - difficult".

I manage to upload one more concept in the next 10 minutes whilst juggling her from one arm to the other as I shift and save.  I can't remember why it requires so much juggling, must be due to her attempting an angry downward dog and my attempts to wrangle while fervently continuing to upload my files!

Baby escalates unto crisis mode because she does NOT want me to sit at a desk. 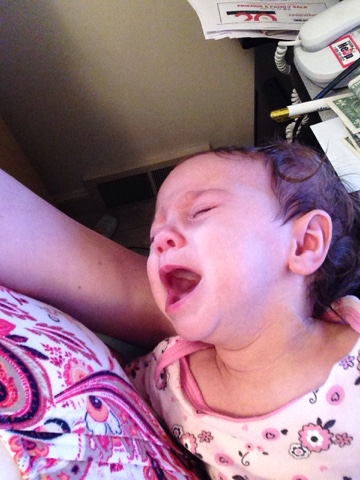 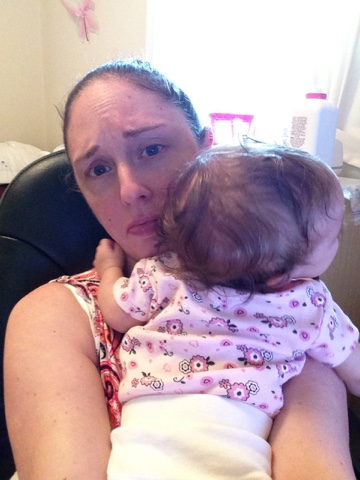 She's 5.5 months old and my 4th.  I've rarely had much success with holding a baby while working so I fully believe it's not possible unless they are sleeping and preferably not on me!  Glad my husband is a stay at home dad or my productivity would be in the toilet!

Our family did not celebrate Christmas with presents when we were kids.  Our church was against any kind of tree decoration or anything that might take the attention off the birth of Jesus Christ so we had this mid year day to look forward to where we'd get presents from our parents

I don't recall the church giving us presents when we were kids but now they do.  Charlotte was dressed and standing at the door by 8:15, one hour early!  That's the power of a gift!!

We had their favorite meal of Fettuccine Alfredo for lunch along with Strawberry pie for dessert and then I took a snooze with baby until 4:15.  I then made the kids snacks but Sam was upset that neither he or I could get the fruit roll up off the wax paper.  Charlotte just ate hers off the paper, it's gross but affective.  Sam was determined and then desolate when he could not remove the roll up like he's seen other kids do in class.  I was of no help.

Violette was outside obsessing over her new bubble toy and Charlotte with her new journal when I decided to do a quick sketch.

The first bird was kinda fun and ornery looking but when I got to the next bird my concentration was shot so his poor head is too small. 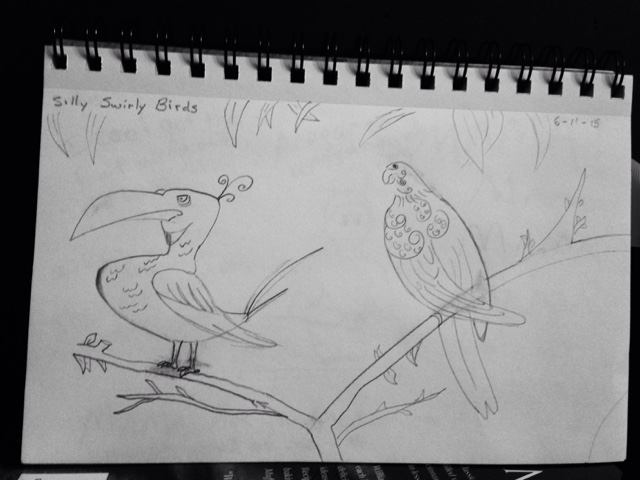 The next drawing is a more accurate depiction of this 30 minute drawing session. 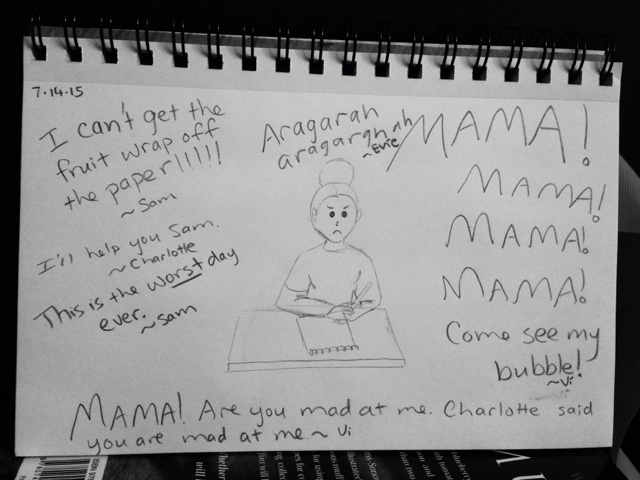 Email ThisBlogThis!Share to TwitterShare to FacebookShare to Pinterest
Labels: Art, Art with Kids

It's raining and a little bit cold!  The kids are fully committed to roughing it but we're not willing to deal with cold wet kids so they are stuck inside.  Pikachu is still getting much competitive love from three Pokemon fans.

I'm working so there's not much I can do to off-set their boredom but they have well over 100 books, tons of toys and movies!
Posted by R. Molder at 11:22 AM No comments:

As a toy designer, I love watching how my kids play with toys but quite honestly they don't inspire many ideas because their idea of play is simply unique to their own interests and imagination.  For example, yesterday I found this - 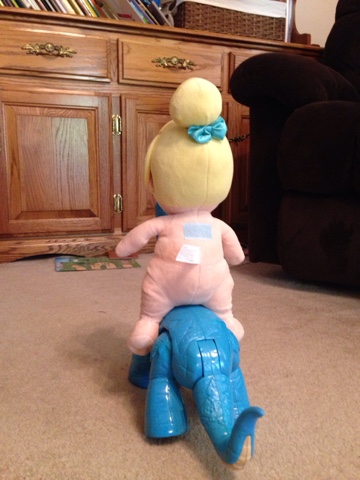 Today I bought these $1.00 bags of building blocks so they could test the connection possibilities.  My husband and I have been percolating on a building block idea for some time now and occasionally it's fun to see what the kids will do with something new. 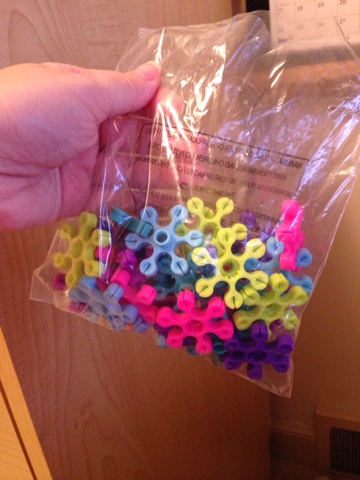 I also went to the basement and found the only existing Pickachu in the household.  Violette has claimed it and has been shrieking Pickachu all afternoon.

Husband says "kids are all frustrated with each other already" at 5:06pm, this after a forced nap at 2:30 when the shenanigans level got too high.  I guess they need structure but I'm not one to pay for summer camps and stuff so let's hope they enjoy free play!