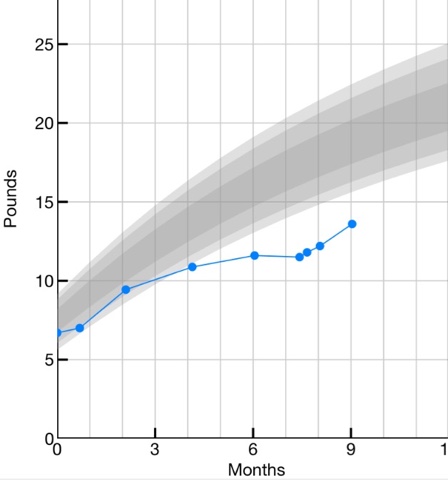 At our September 30th doctor's visit, Evie was 9 months old and weighed in at 13.6lbs which means she's put on 2lbs since 6 months old.  Still tiny but she's putting on enough weight that the doctor's are no longer in a panic.  Now their issue is that she must learn to eat with a spoon and come back in 6 weeks to talk about how that is going.  I'm a little bewildered over this because our Florida pediatrician never pushed eating with a spoon this early.  They want to send us to a specialist if we can't get her to eat with a spoon in 6 weeks.

Unfortunately for us, our baby is now extremely addicted to cookies!  Remember when we were told to do anything to get her to gain weight and take in calories?  We gave her the highest calorie shortbread cookies we could find.  Now she only wants cookies.

She's still a baby who wants to be in full control meaning if you present her with a spoon, she will grab it and the food will go flying.  So we're trying a variety of finger foods and some of them have surprised us: 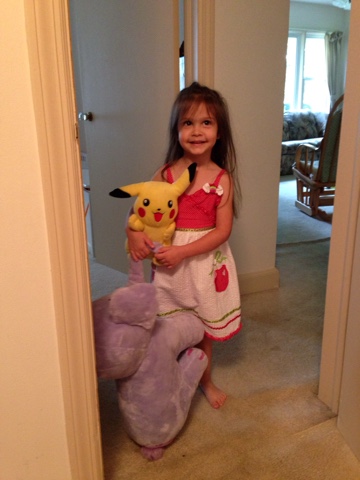 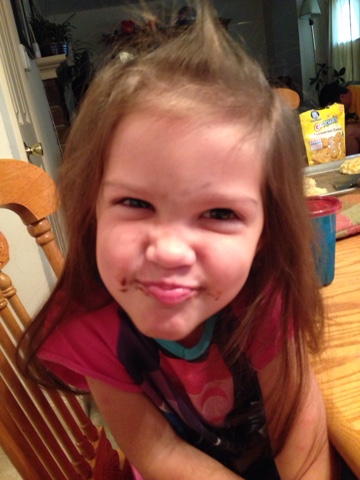 Sept 9th
Don't have to get dressed, not going anywhere! 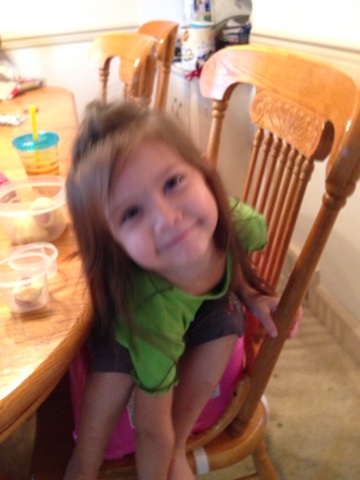 Sept 10
Good thing mom works from home and can make my lunch!  Dad's napping with the baby. 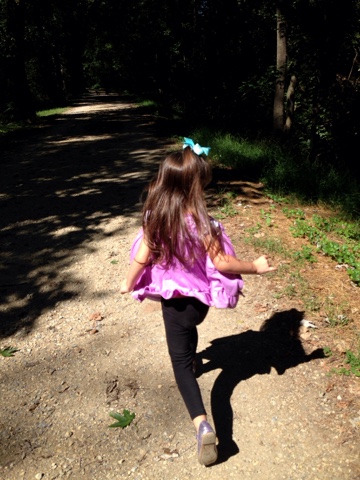 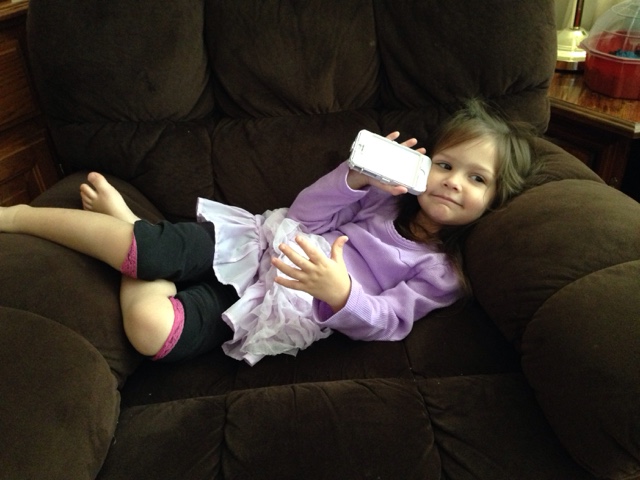 Sept 23
Phone time!  Games, games, games and no one to argue with! 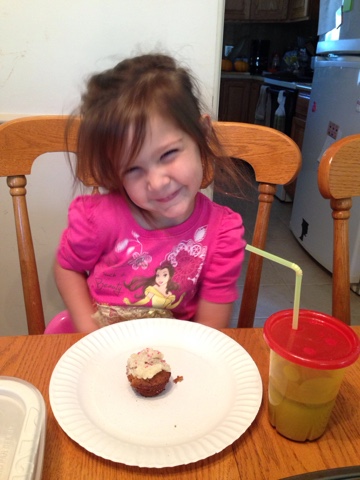 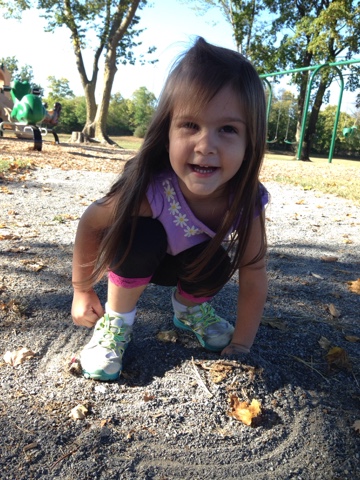 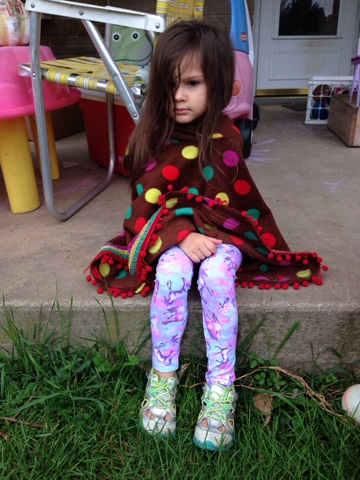 Sept 28
Just hanging out on the porch, wondering when winter is coming.
Posted by R. Molder at 8:00 PM No comments: 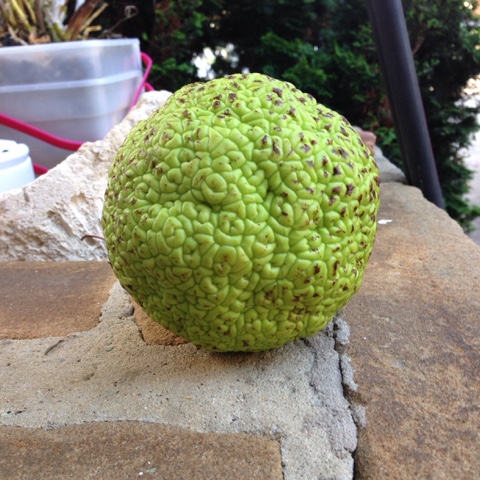 We found these at the city park and called them brains.  The real name is "Osage Orange".

The Brain fruit has lead to some wonderful conversations with our son.

"Can I take my brain to school today?"
"My brain is covered in ants!"
"Oh look, I've dropped my brain and its rolling down a hill"
"Charlotte took my brain and now I can't find it!" followed by dad saying "I lost my marbles once"
Sam again "Can someone help me find my brain?"

I've blogged this recipe before and now after making it for a year, I'd like to update with a few tweaks that I've made to make it more user friendly.  I find that I never have heavy cream on hand so it's just become easier to make with evaporated milk.  I also made some small measurement changes to make it easier to cut in half.

The main ingredients are very flexible in that it tastes very similar regardless of what combination you use but my mother in law hates sweet potato so for her taste we make sure it has only squash.  Here are some of the combo's we've done:
Double recipe (serves 8-10)
Main Ingredients:
Topping Ingredients:
Topping can be combined in a small food processor; I have a little 3 cup that does the job nicely.

Pour the main ingredients into a 9 x 13" baking dish and drop the topping by small spoonful's over the top.  Bake for 30 minutes covered, 15 uncovered at 350.

Single recipe (serves 4-5)
Main Ingredients:
I skip the topping when making this for an evening meal for our family.  When it's for a crowd I add the topping because it's pretty and adds an extra layer of sugar goodness but I can attest that it taste really good without the topping and the kids will still eat it.

This is our 7th year of celebrating "Talk Like A Pirate Day" and it's become a BIG DEAL!  Costumes were pulled out the night before and I believe there was talk of sleeping in pirate gear.

At 7:10am this morning I was woken by the middle children who whispered to me "Mama!  Wake up, it's PIRATE DAY"!

This year we invited friends and upon arrival our little friend announced "I'm ready for the epic play date to begin"!

The first adventure began with a treasure hunt and this way cool map that my husband made. 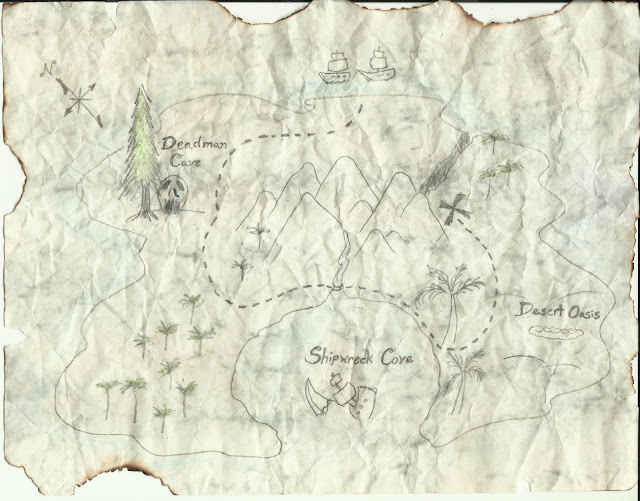 The mountains are the house and the ships are setting sail from our back porch.  First my husband had all the kids sit at a table and review the map.  One little friend suggested we take a shortcut to get to the X but they discussed how that line in front of the X was a bottomless pit so we could not possibly go that way! 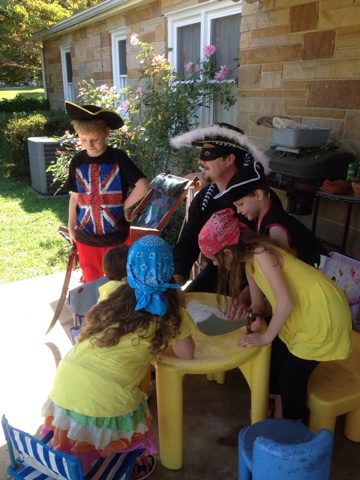 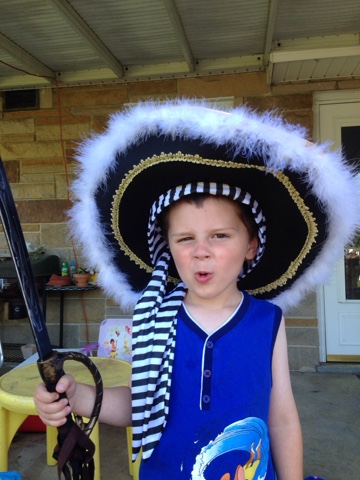 "ARG!  I shall make my sisters walk the plank", said pirate Sam! 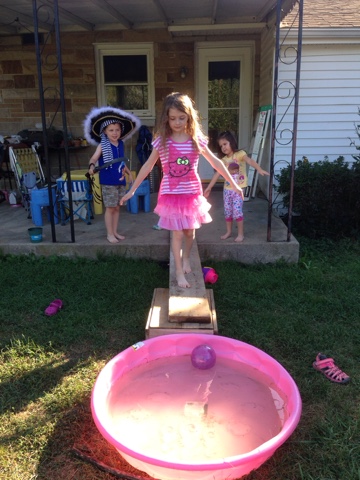 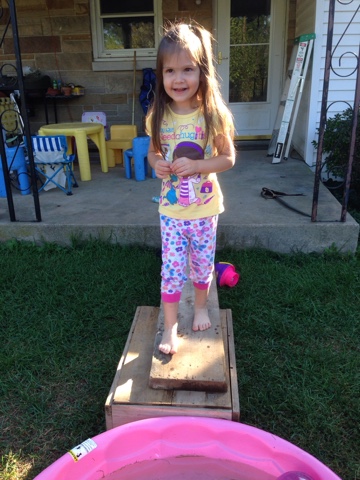 After the plank they wandered around looking for Dead Man's Cave. 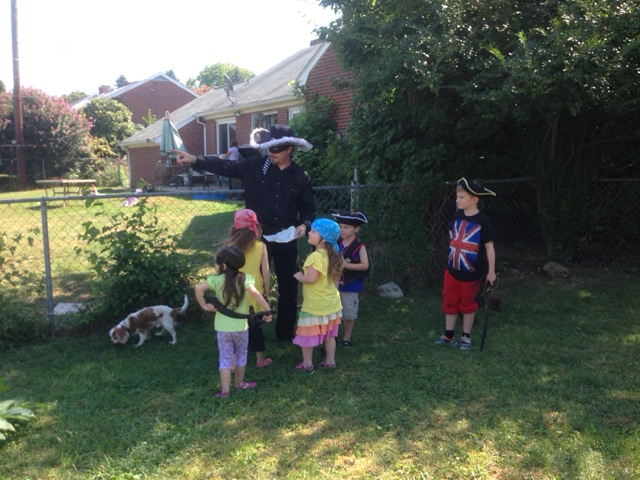 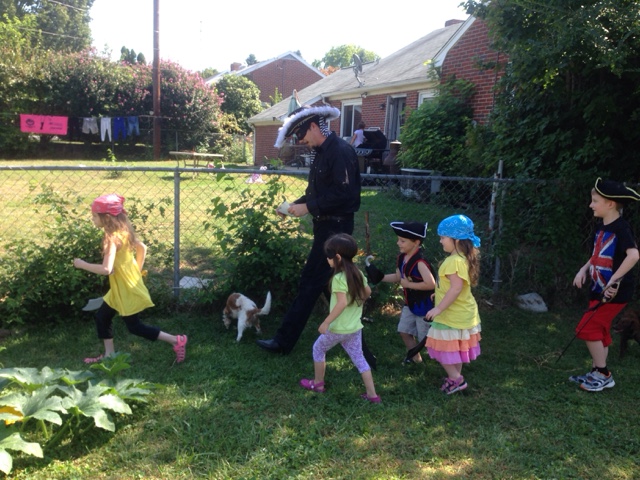 Next we walked past Dead Man's Cave, where a skeleton from our Halloween collection was hanging in a shed. 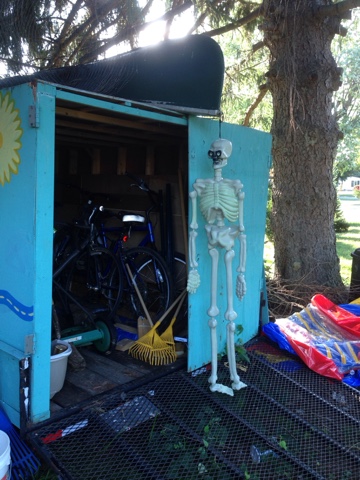 Shipwreck cove was the driveway with "wrecked ships" as cars.

The Desert oasis was our bird bath.  We had planned a stop to drink water out of a cooler but ran out of time to set up a cooler and in hindsight the kids were getting insane with excitement at reaching the treasure.

We ended at the back of the house with a giant X over a window well cover that our oldest ripped out of the space and snatched the entire treasure box.  It took some convincing to get the entire box to the back porch for sorting treasure into everyone's buckets. 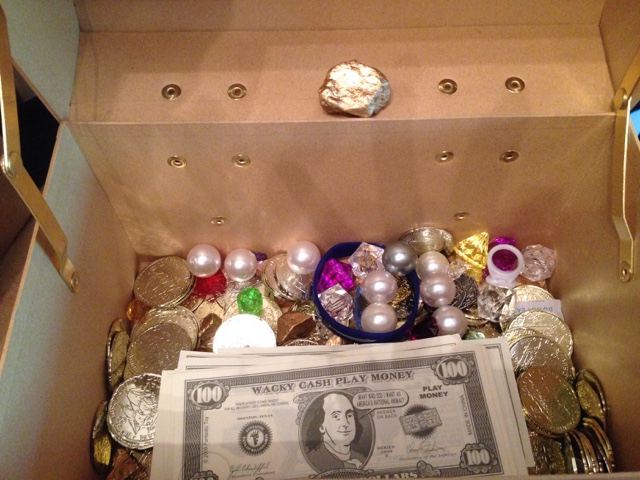 The treasure chest was found at Hobby Lobby for $12.95 and its paper mâché but it should last several years if we put it away.  We bought a few packs of paper money, spray painted gold nuggets and bought some cheap costume jewelry.  They loved it!  That's an understatement, they actually kinda obsessed over the stash.

Next we had lunch and calmed everyone down with a pirate movie.  This was semi-successful.  One child was too hyper to sit still so we took her for a walk, everyone else seemed happy to watch the movie but when we got back they were climbing everything in sight so we ended the movie and moved onto the treasure chest piñata. 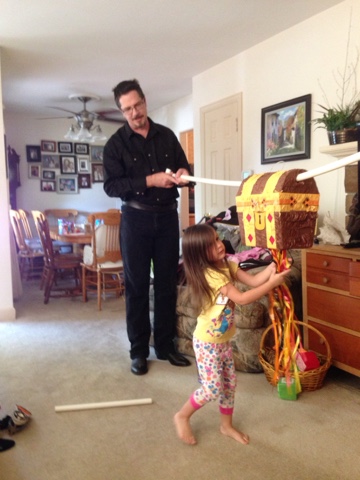 This part was hilarious, they wacked at it for a good five minutes before finally breaking it!  Afterwards we had snacks of homemade cookies, candy and root beer floats.
Finally, here is our youngest pirate.  She said Argh all day long!!
﻿ 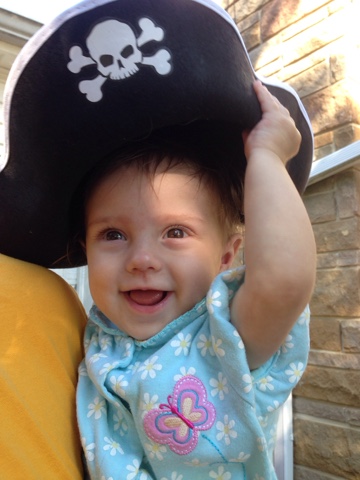 My Texas born husband and I sure do love Chili - we like it spicy, with lots of beans and homemade cornbread.  My husband came up with this recipe as a quick Chili so it's mostly just opening cans and browning meat, in his words, a decent Chili would mean soaking beans overnight, quality meat, etc.  We never seem to have time for all that!

We started making double batches and freezing it but the taste is never the same so last year we started canning it in quarts.  It gets pretty dark in color and dense so I find we need to dilute it with about 1 cup of water but taste is still great!  Here's our homemade Chili recipe in regular and quadruple batches:

Regular Recipe:
We pretty much just dump everything in a pot and simmer for 2 hours.  You can add 1 chopped onion if you like it.  I think it got omitted over time because it added an extra step and this is meant to be done firecracker fast.

We eat this with homemade Cornbread and piles of cheese in the Chili!

Quadruple Recipe:
This can be a little flexible on the amounts depending on how you like to buy the ingredients.  We've replaced the 4 cans of red beans with one giant can of red beans which is 110oz whereas the 4 small cans total 62oz and it doesn't seem to affect the flavor at all.
You really need a giant pot for this amount!
Posted by R. Molder at 3:22 PM No comments: