We thought it would be fun to wrap our kids up like burritos.  They thought it was hilarious!! 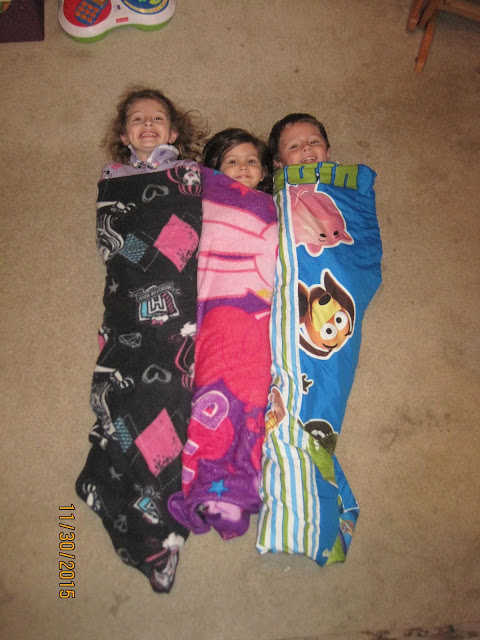 And baby thought it would be fun to crawl over everyone. 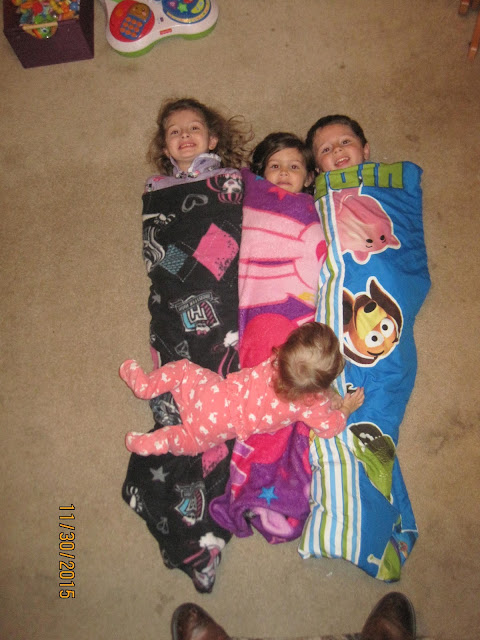 Email ThisBlogThis!Share to TwitterShare to FacebookShare to Pinterest
Labels: Family

This was a good visit!  Evie's ear infection is better and she is finally 14.1lbs and the doctor is satisfied that she doesn't have to return until she turns one, which is in one month.  My goal is to get her to 15lbs but the doctor said 16 would be better.  Her weight is still well below the charts which is keeping her still in the 'failure to thrive' category so now the primary goal is to keep the weight going up and not stagnating. 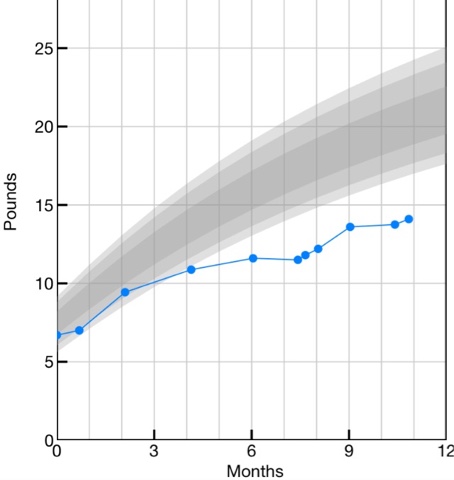 Her eating of solids has improved drastically over the past month and she's now enjoying:
We've tried cooked carrots, smashed fresh bananas and cooked apples but those are thrown on the floor.  It's been easier to stick with foods she will feed herself and spooning in the Gerber fruits.  Her appetite is increasing so that's a good sign and I'm still nursing her every three hours so that's how she gets her liquids.  She still won't take a bottle or sippy cup of any sort.
Posted by R. Molder at 12:06 PM No comments:

Well I just received a letter saying our coverage is going up from $658.02 to over $1,000 for 2016 so we need to reapply for insurance if we want to keep our plan in the same price range as 2015.  From what I understand, more people than expected used coverage in 2015 so premiums need to increase to make up for the difference.

Time to grit my teeth and hope we don't repeat our experience from 2015 that lasted from January - June.

The website still stinks in terms of user experience.  In order to make a change you have to trick the system.  I say this because it forces you to select something from a list saying that you've had a change in your income, employment or had a baby.  I've had no changes so I tricked the system by making a one dollar change in my income.  However, I had no issues in getting through to the insurance options and I was able to find one from Evergren Health for $668.60 that is only slightly more than what we paid in 2015.  I hate to leave Blue Cross as we've been with them for 3.5 years but I can't pay over $1000 for the same plan.

This plan has a higher deductible, I think 1,500 when we had $500 in 2015 but there doesn't seem anyway around that.  From what I understand, deductibles went up along with increased use of insurance premiums in 2015.  So we all pay more this year?  I guess that's the answer to health coverage for all Americans.

This is a very long story of how we took a crash course in health insurance and lived to tell about it.  The story is broken down into monthly segments which involved many hours on the phone and tears of anguish as I wondered if the savings was worth the battle.

DECEMBER 2014
Our 4th baby was born December 29, 2014 and we received a letter that month saying our 2014 plan did not meet The Affordable Care act qualifications so I quickly signed up for a family plan through eHealthInsurance.com.  It was very expensive at $982.13 per month so I started researching cheaper options and learned that we could get subsidies through the Maryland Health Exchange.

JANUARY 2015
I signed up for MD Exchange mid-January naively thinking it would go through instantly and I could cancel my expensive EHealth plan and not put the baby on that plan.  I was so wrong.  After filling out all paperwork for our family, the site locked me out and my application froze.  I could not get back in.  The following is my futile attempts to get someone to help resolve my case.

1/28 - called Maryland Health Connection and explained the problem, was told my issue could not be resolved that day as it was a technical issue but that they'd elevate my case.


1/30 – called Maryland Health Connection, was told my case was escalated again.
At this point I realized I had to keep the coverage we had through EHealth for another month and get the baby on this plan because we didn't know when the MD exchange would be active and we already had doctor visits lined up for our newborn.

Realized that the plan I had signed up for at the beginning of January was an HMO and that would not work for my travel plans so now I wanted to change the plan and I was still locked out of the system!

2/12 – called Maryland Health Connection, 20 minute wait time before live person answered, total call time one hour and 16 minutes and I attempted to explain that I needed to change the plan I had originally signed up for.  Was told my case was being escalated.

Realized that calling two days in a row might be excessive so waited until later in the month for next call.

2/18 - got frustrated with waiting and complained on Twitter.  Someone actually wrote me back and asked if they could help resolve the problem.  I figured I wasn't getting anywhere with the phone calls so why not!

2/26/15 - Twitter MD Exchange gave me the option to change plans after I expressed the need for a PPO.

2/26/15 - At this point we suddenly we got temporary cards in the mail for the 3 older kids but nothing for the baby!


I realized I needed to continue coverage with EHealth for both adults since the Exchange was not forthcoming in when our application would be resolved but at least I could take the kids off the plan since they were obviously now covered by the Exchange.  This would take another month for EHealth to accomplish so I had double coverage which could get us into a lot of trouble if we had any medical issues that month as both parties would fight over who's responsible.  Fortunately we had nothing come up.
MARCH 2015
3/3 - Twitter MD Exchange asked what date I wanted PPO coverage to start.  Considering I had already paid EHealth for March coverage I confirmed 4/1 start date.

Yeah for Twitter!  I then proceeded to finally cancel our expensive EHealth plan because I finally had confirmation that a new plan would be starting on April 1st!

3/9/15 – was billed Jan – March coverage in the amount of $2,204.46 for the MD Exchange HMO plan retroactively all because I had my credit card in the Blue Cross system so it went on my credit card without any warning!  It would seem that my husband I had been suddenly approved for MD Exchange for the original plan and they wanted us to pay for service we couldn't use for first two months!!!  I was so mad because we'd been paying another plan through EHealth for these two months all because no one could tell me when our application would be resolved through MD Exchange and they were charging us for the HMO and not the PPO that I had called to request.
3/9/15 - called Blue Cross to dispute $2,204.46 charge, the guy was able to remove auto pay and said the charge would be reimbursed.  Yeah!
3/24 - Received credit card statement showing the $2,204.46 charge had not been removed.
3/24 - called BlueCross to find out why I hadn't been reimbursed the money for Jan – March plan.  The lady today said it was impossible to reimburse on their side until the Exchange voids the plan.  No idea why the guy on 3/9 said it would be reimbursed.

I elected to not attend this visit because I had a very busy work day.  This was a follow up visit to see if she's been eating with a spoon. At our last visit they said if she wasn't eating with a spoon by now then they'd recommend seeing a specialist.  Fortunately she has been eating with a spoon only very sporadically and her weight gain was marginal (one ounce gained) in the past two weeks so the doctor wasn't pleased with this.  In addition she had an ear infection and has been sick with a cold for the past two weeks so I think that contributed to the slow weight gain.  The doctor gave us medicine for her ear and asked us to return in 2 weeks to see if it was better.

I'm so thankful we were blessed to receive a health insurance plan through Maryland Health Connection this year that has not charged us for any of these extra visits!  What a relief it has been to not have financial burden piled on top of 'failure to thrive' condition!  I know many people are against the Affordable Care Act and I've written extensively about our issues with the adult plans but for kids it's been extremely helpful.
Posted by R. Molder at 6:30 PM No comments:

This year we found ourselves raking leaves in November.  I found it to be a lovely respite from sitting at a desk every day.  It's more invigorating than afternoon coffee to go out and rake leaves in the afternoon.

Usually my girls wear skirts, they prefer to look girly but today I told Charlotte she needed to wear jeans because we'd be jumping in leaves and sitting on hay bales and I didn't want her pretty skirts to get ruined.  She actually doesn't even like jeans so it took some fussing to get her into them and find an appropriate belt because she's far to skinny to actually hold them up.  I think she looks so cute in her farm girl outfit.  She was a huge help with picking up the leaves. 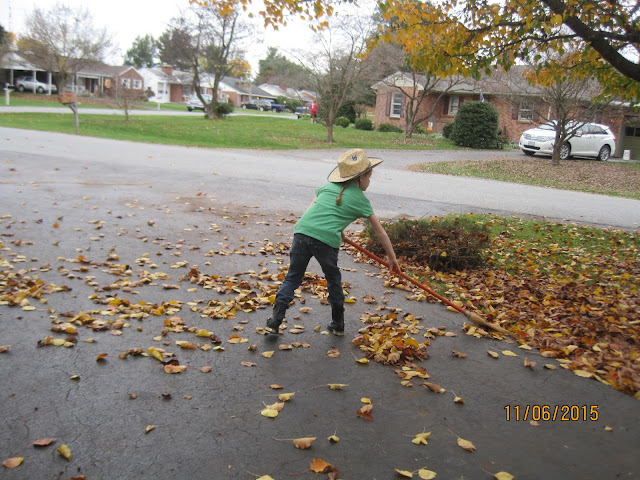 Sam and Charlotte got really possessive over their sides of the yard so I had to really work with them to rake in just one area so we could work as a team and get through a decent portion of the lawn.  Here's the team after we finished (Vi's in Texas visiting Mema): 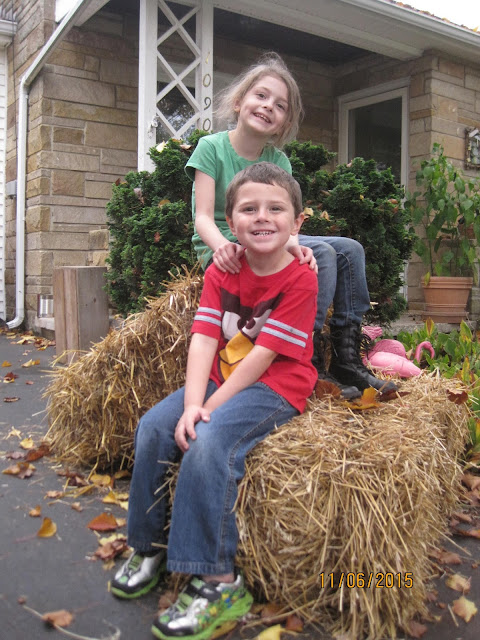 Thanks to El Nino, we're outside in t-shirts!
Posted by R. Molder at 6:57 PM No comments: