One kid pushed back into school!

They've been home for two quarters, in this time we've seen one major surge of coronavirus in this area which I covered in November/December.  The levels in our area appear to have fallen back to 5% as people are getting vaccinated.  I guess it's fair to say our quarantine is coming to an end.

Evie is the first to go back because she needs more reading time with her teacher than what I can provide.  Despite my best, or I should really say floundering efforts, she's not where I'd like her to be and I know she will benefit from being in school.  She was so excited to go back, up at 6:30 and promptly dressed in her best outfit, it is literally the first day of school all over again.  I'm really happy for her.

The others, well I'm sad to say Sam didn't do so well this past quarter.  He missed many assignments, there's been lots of debate over the how and why but regardless, the numbers don't lie.  I ordered new school pants, he grew out of the ones I bought for the school year, and they arrive on Friday so next week he goes back!

Charlotte has been a rock star in all this, and I don't say this to compare apples to oranges when it comes to my kids but the simple truth is she's more mature and has handled her work load well.  She wants to stay home and I'm of a mind to let her.

That leaves Violette, who also wants to stay home.  She gets her work done and her class is super full at school so I'm of a mind to keep her here.

We might have a 50/50 split for the remainder of the year.  I guess that's fine.

It's time to renew my passport!  I know that once I turn it in that I won't get it back.  I'm sad to say goodbye to some of these stamps, Japan and Paris are two fond memories.  For these more unusual trips, one never knows if they will happen again!

Apparently 2011 was a BIG year for travel for me:

Email ThisBlogThis!Share to TwitterShare to FacebookShare to Pinterest
Labels: Travel

With Mike gone for two weeks, I struggled just to keep the basics going and put off the seedlings until his return.  Now I've removed all live food from the pantry room to prepare the room to be in the 80's for the foreseeable future.

I've also wrapped the shelves in plastic to hold the heat in and seedlings are on a heat mat.  Now we wait for sprouts! 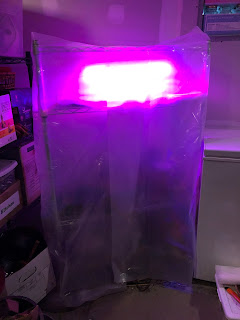 I also have edamame and purple sweet potatoes on order and I plan to plant black beans in May.
Posted by R. Molder at 10:57 AM No comments:

After two negative tests we are sure Mike did not catch the virus.  This despite being in a home with two Covid-19 patients, three times a day for seven days.  He wore two masks, one N-95 and was fastidious with hand washing.  Super thankful to have him back, but I also proved I can manage the kids for two weeks without him.  This was literally my first two weeks without him!  I've gone on many long trips over the years and left him alone.  It was interesting to be on the flip side.  He found himself doing the same thing I do when I get back from a trip, diving in to do whatever needs to be done!

My cousin and aunt are getting better.  My cousin will probably need another 2-3 weeks to get her strength back, she was hit pretty hard with this virus.  Thankfully we have care takers in place to help with my aunt and some substitutes at school to help my cousin ease back into work.

Mike was called in

We'd prepared ourselves by discussing our covid quarantine plan at length, it was simple, if one of us is exposed we live out of the camper.  My husband was undaunted by cold nights saying his sleeping bag is rated for 40 degree nights.

We got the call on March 24th, my cousin was too weak to help my aunt get out of bed and my aunt needed help getting out of bed and down the stairs so Mike left his classes at 11am and he's been over there three times a day ever since.

We pretend he's on a long work trip.  I did plenty of trips over the years where I was gone 2-3 weeks but this is different.  The kids are stressed about Amanda's health and now Aunt Joyce's health, both are dearly loved family members.  This makes for lots of kid fights and picking, they can't seem to leave each other alone some days.  Yesterday I instituted a policy where you apologize to the family for disturbing the peace for yelling at someone, screaming, making obnoxious noises more than 5 times, bossing someone around, etc.  First apologize to the person you yelled at, then apologize to the family for disturbing the peace.  We spent considerable time on this over dinner last night, I can't say if it's helping or not.

On March 31st we found out Joyce had Covid but Mike tested negative.  I guess his mask worked!  He was in a covid house 3 times a day for 7 days and didn't get covid.  Fastidious hand washing and wearing a well fitted mask did the trick.

By April 1st, care givers had been hired and began working.  Now we count day from 7 days from last contact, get Mike retested and then he can come home.  I wanted him to get a rapid test but he argued they are not as accurate and then all this separation could be for nothing if he still brings it home.  Well, it sucks to say the least because he will miss Violette's birthday and Easter.  I'm struggling with that but I'll be okay.