Today we lost our sweet cat, Mr. Peppers.  He had a disease known as FIV, which is Feline Immunodeficiency Virus.  It's not very common, only about 2.5 - 4% of cats have this but it's passed through biting with outdoor cats and Mr. Peppers was a rescue cat.  We knew from early on that he had the potential to pass away quickly from an infection.

Six months ago he had a urinary infection and I was able to get him to the vet in time for an anti-biotic shot.  When it happened again this past week, I was hoping it would be the same, he'd get the shot and feel better.  He seemed to perk up for a few days and then today we could tell he was in quick decline.  I'm just glad he didn't suffer.

The kids took it very hard, several cried.  I took the day off work, it was very hard to concentrate.

Some of my best memories of Mr. Peppers:

* He could not meow, so he'd look up at us, catch our eye and then make these very cute little head movements to get our attention and get us to pet him, despite being a silent cat, he was able to communicate his wants and needs.

* He was very gentle.  One might expect a great outdoors-cat to be more rough, but he was very cautious and never aggressive at all.

We've had him one year and six months.  I'm so honored to have been part of his cat family for the last part of his life. 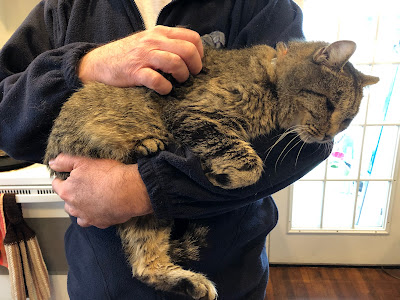