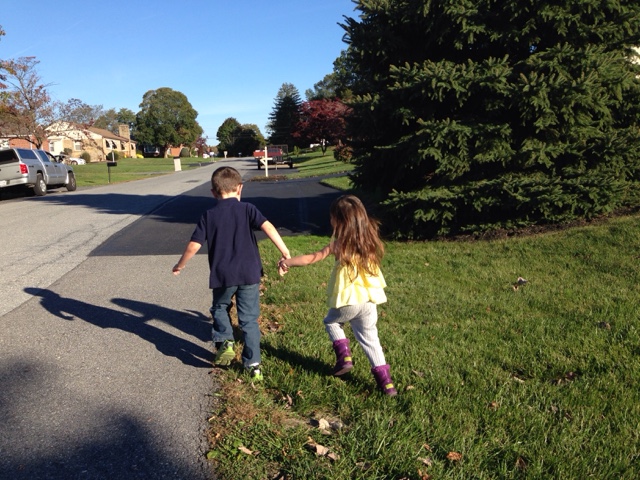 I'm behind them with a dog and the baby.  They trip each other a half dozen times before Violette finally falls off a short wall.  I think we just need more practice walking together. 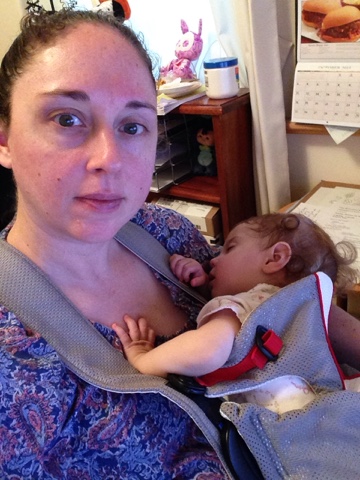 The walk put baby to sleep, I should really do this more often.
Posted by R. Molder at 11:01 PM No comments:

A Tale of Rotting Tomatoes and Finding Balance

I have a pile of rotting tomatoes sitting on the porch that have been waiting to be processed for several weeks.  It pains me to admit that I just can't process them.  My life has become so incredibly busy with a full time job, four kids and other extra circular responsibilities that I just can't seem to squeeze in one more thing!  Well - technically I could stand at the sink for 2 hours per night until they are done but those days are over.

Going back in time 3 years to when I worked full time in an office, held a board position for Women in Toys and traveled to Asia once a year with 5-6 domestic trips - I was busy but I had this long term goal to move our family to Maryland so I was very focused on that goal and ignored all the signs of strain in my life.  I just pushed it aside and said I can't slow down until all these boxes are packed and we are successfully moved!

In 2013 we moved to Maryland in July and for the next 6 months things were upside down as we got used to life and I continued to travel somewhere once a month.  I put this stress aside and said things will calm down soon, I just need to get used to Maryland and working from home.

In 2014 things got even busier at work so I felt like I just needed to "try harder" and be "more productive" with my time.  I tried ignoring house work for awhile but that made me crazy and caused my anxiety to spiral out of control.  I hired a house keeper and that helped reduce some stress.  Work was extremely challenging, not because I was "working remotely" but because of employee turnover and new hires that were not performing well so work was spilling over into my lap and I was suddenly working around the clock.

I had a breaking point in February of 2014 when I knew things had to change so I joined a Christian organization that offered mentorship to professional women - 4WordWomen.  I seriously thought they would give me advise on how to do MORE with the time I had.  I thought more professional women must have the secret on how to do even more then what I had been doing thus far.  I was so wrong.  My mentor basically told me to stop saying yes to everything.  She even questioned if I really needed to be on the board of Women in Toys - that was a shocker because I was so sure that I was doing all the necessary steps to maintain valuable contacts in my field and how could I possibly let that go?

My mentor questioned everything that I was doing and just put it out there to evaluate if I really needed to be doing everything I thought was so important.  She really helped me to reframe things and I'm so grateful for the experience as it really helped me to calm down, work less hours by insisting on changes at work and doing the things that were important first rather than trying to cram everything in.  The mentorship ended in the summer and I spent the rest of the year reframing my priorities.

Now here I am one year later and I no longer get upset when I can't do something.  Two people came to me recently to help with a surprise birthday party for a dear women in my life.  I know they want me to do more but I simply cannot and I'm okay with that.

I got a call today asking if I still want to be on the board of Women in Toys and I gratefully stepped down.  I just don't have the time to put in that I used to and I'm confident that I can come back and be a productive member when I do have more time in the future.  I think 3 years ago this would have felt like a professional failure but now I see it as just one less thing I have to do which means I can breath a little easier.

As I processed this decision to step down from the board, I realized my life in Maryland has become so different than I imagined it would be.  I thought I'd maintain the same professional life that I had in Florida with the same level of travel, same board position, same everything and I realize now I was so determined to keep things status quo that I worked myself to the bone to make it happen until I realized I couldn't.

I am actually happier with this "less professional" life.  I love eating lunch with my three year old and taking walks in the afternoon.  My cuddly my nine month old is with me every three hours when she needs to eat.  I get to spend a little time with the older kids when they come home from school.  I still work long hours but it's with these wonderful little mommy breaks thrown in.  My work has not suffered, in fact most days I'm very cheerful and happy due to being home and cozy with no stressful mornings of getting dressed for a commute to work.

The primary challenge has been finding balance when I thought I needed to be so much more.  I still want to do it all but I have to be careful to NOT prioritize the rotten tomatoes in my life :) 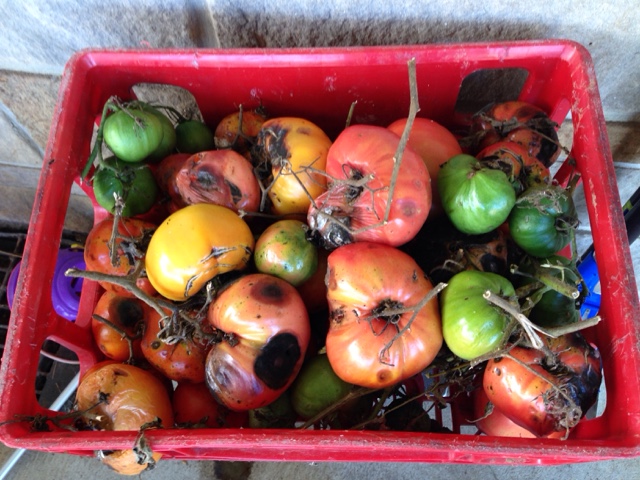 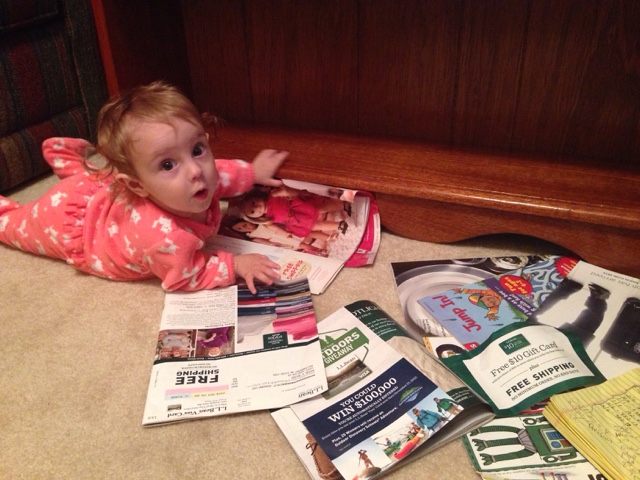 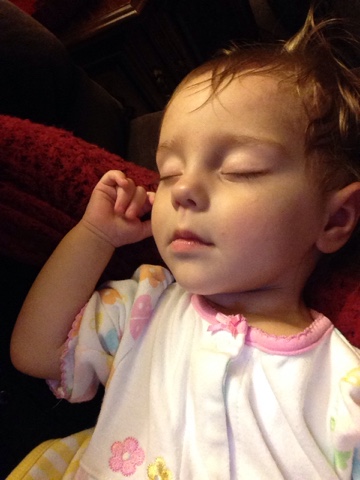 Some nights it takes awhile!
Posted by R. Molder at 10:47 PM No comments:

8-10 months old - the crawling and pulling up stage

First make sure floor has nothing small enough for baby to choke on.  I work in the toy industry so here's a handy tip - nothing smaller than 1.25" in width or 2.25" in length and here's the chart we use:

Here is a product that's only $1.65 that you can drop toys into to see if they are too small for a baby. 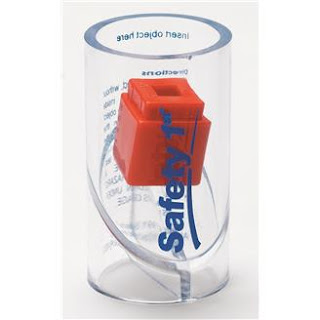 Now for the fun ways to entertain baby:

This list is assuming you've already bored your baby to tears with his or her current basket of crinkly, teether baby approved toys and is now looking for other sources of entertainment.  Don't be surprised if they are done with these toys in one week after crawling because this age is all about exploration and pushing the boundaries!  Put all trash cans up or your trash will be sorted for you.

Play should involve discovery of new objects and lots of noise, these are my top go-to toys after having 4 kids and watching them play.  You should be strategic about introducing new toys.  After two weeks of crawling introduce a new toy.  Then maybe a week later the next and so forth.  The goal is to keep things interesting by introducing new objects each week and if you can't afford these more expensive toys do not worry because there are plenty of simple less than $10 items available.
My advise is to save the more expensive toys for when people come asking what does your baby want for his or her first birthday and then only get 1 or 2 because your house can fill up so fast with stuff that just sits around.  Ask friends and family for diapers, clothes and shoes for that 1st birthday because those things get expensive and babies just don't care at this age about getting tons of presents.  To be honest, what they really want most is parental interaction so here are some fun ways to entertain/distract your baby when they are done with toys:
I find myself sitting on the floor with baby the end of the day, when she is tired but not quite ready to go to sleep and needs me to be close.  She climbs over my legs back and forth, stands at my shoulder and crows in my ear and off to play with a few toys.  It's fun and easier then trying to force her to sleep.
Posted by R. Molder at 10:25 PM No comments: