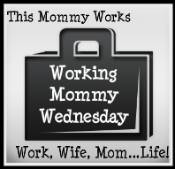 Linking to Work, Wife,Mom...Life! for Working Mommy Wednesday. For this week the discussion is:

When I started Facebook 2 years ago, I thought it was just for close friends. I quickly received friend requests from everyone I grew up with, went to college with, worked with, etc. I tried creating rules like no current co-workers, no one I don't remember and no one I don't know. Before the first year was up I was friended by a co-worker so I could connect with someone on his friend list. Then more co-workers contacted me and I thought why not. By now my barriers are so broken down my list includes the following:

- classmates from The Art Institute of Pittsburgh

- classmates from The Art Institute of Fort Lauderdale

- and finally almost everyone I'm currently work with barring the exception of my boss, but since the Director of Ops friended me there is not much that won't potentially filter to the top.

This list includes a wide range of beliefs and political views. It's common to read opposite views on abortion, politics and religion on a daily basis on my wall. I find it fascinating that I know such a wide range of people and I think it's a reflection of myself as an accepting individual.

Initially I wanted privacy in my Facebook page to post things I'd want close friends to read but after collecting this wide range of friends I keep comments general and family related. I firmly believe that nothing should be written in digital form that one would regret the entire world reading.
Posted by R. Molder at 7:22 AM

I agree with that last statement. Some people include waaay TMI on FB.

I tend to sick to family and friends. I have trouble keeping up them as it is.

I remember when FB first started and it wasn't open to every single person on the planet. It was where my friends and I posted pictures of our crazy weekends at the bars and parties. Obviously things have changed since then and you can't just put whatever out there.

I do "friend" some co-workers but I try to keep it to only people who I really talk with. And not my boss. And she's okay with that :)

I tend to do the same as you -- keep my FB posts general and about family. I've even started hiding my "friends" that get too political -- on either side. I just can't stand the drama!

i don't do facebook, and am a once a fortnight twitterer, so stick mainly to blogland. i think it takes a lot of involvement across all places to keep them going, which is too much for me!

i do worry, even with my reduced angle in the online world, about writing something that later i'll regret. i don't think i'll ever resolve it, but console myself that in blogland i can stick a date on my unwisdoms, write the back story, and later call it history!

I am an open book and stick my foot in my mouth frequently. Even so, I started breaking many FB rules a while ago and must live with the consequences.

And I've always had friends on both ends of the political spectrum, so I find it insteresting to see both sides on FB, too!

I started a FB page a couple years ago, as well, and friended people as long as I knew them at some point in my life. I have also looked for people on there, that to me, were long-lost friends. However, upon their acceptance of my request, it was pretty clear that they didn't think much of me over the years. There isn't much interaction. And I have deleted people in the past. I just couldn't keep up with everyone. So, upon reading this, I was prompted to go through my list again and see who I would delete today, if I had the time and guts. 17 more people, give or take. As far as deletions go, it doesn't matter their political or religious views, so much. It's the lack of interaction. Plus, having statuses that bore me to tears isn't any help either.

And, I have denied people who have tried befriending me, whose pictures, in some way, are contrary to my religious views.

Sometimes I wish that I had kept it close (old and new) friends and family, but it would have been kinda hard to not accept old high school friends that I hadn't kept in contact with, my church family, etc. Anyhow, it's a fun place to socialize with my old friends and family since I live so far away from just about everyone. And, it's just fun to keep up with my newer friends too.

I have trouble with the whole FB thing because, to me, a "friend" isn't someone I hardly associated with in high school, who happened to find me online 20-some years later. If they used another term, I might be fine with it.

That's why I've become a FB avoider. It's made my life more complicated because (or so I'm told) I dwell on it too much.

i have some people that i don't know want to be friends with me, and that bothers me... i mean, i don't have a lot of personal info out there, but you never know.

and your last statement was GREAT!! so true!

I'm right there with you! I have people on Facebook that I haven't even seen in person in 20 years! Sometimes I wish I had a bit more privacy, but I think the wide variety of people gives me accountability too, with what I post and comment.

With regard to FB, I typically go through my friend list a couple times a year and de-friend those who don't post themselves, or those who I've decided I don't want knowing my family business (although I do keep it all fairly generic in content). I call it "spring cleaning" and it's therapeutic. Give it a try sometime. You might like it! LOL.

Someone told me this week you can group people on Facebook and just post things in private for that group. I haven't tried it, but I agree with your post!!

So I haven't joined FB yet, (I know, last person on earth!), but I do wonder would it be a time suck for me...I'm sure there are a million people I would look up or would it be a good thing? I don't know. I feel as if I will cave soon though!

I'm with you! I tried to keep it private at first, but that didn't last long.

I missed WMW last week. This was a good one too!

This topic has come up a lot with me and some work friends. I decided no one from work on Facebook. Period, no exceptions. And then I caved and let ONE person in --- but that's it!

I tweet, blog, and facebook. I'm pretty sure I have put stuff out there that I may have to deal with later on.

** Thank you for commenting on my blog **