This post is for my husband who actually took the time to look up past Thanksgiving posts to see how we had celebrated and only found 2009 even though this blog has been around since 2006.

It means alot to me that he took the time to look and it's one of the main reasons I write our stories because we forget so easily. So dear husband, here's a short recap of our past four Thanksgivings:

2007 - I had just found out I was pregnant with Charlotte and I completely lost my appetite. I don't remember anything. 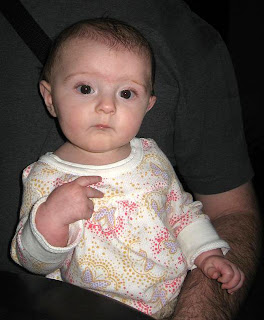 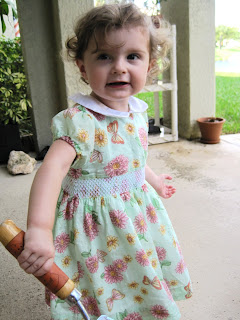 2010 Thanksgiving
Our day started at 9am - astonishing with two small children who are usually up at 7am. We don't know what miracle caused them or us to sleep so late but we do know the two year old is responsible for turning down the volume on the baby monitor which thus insured we didn't hear anything.

While my husband prepared pumpkin pancakes Charlotte covered her face in Vaseline which required a quick bath and reheating of the pancakes. 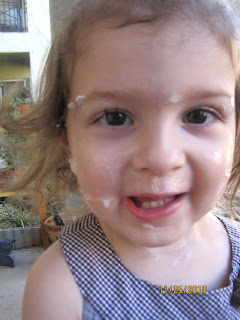 Breakfast was at 11am, or I should say brunch since it was so late in the morning. Afterward we packed up the kids and headed to the beach. 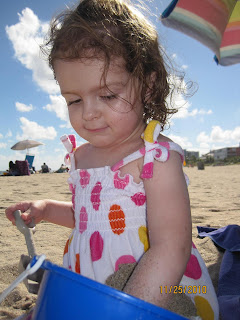 Her freshly cleaned hair curled beautifully in the wind. 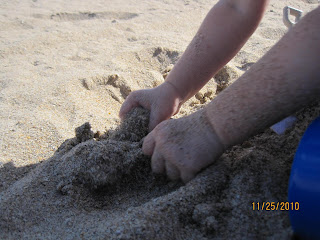 And here is our handsome four month old son. 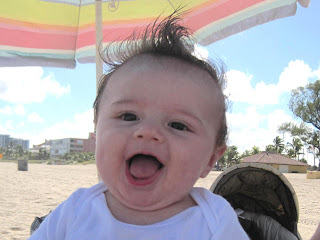 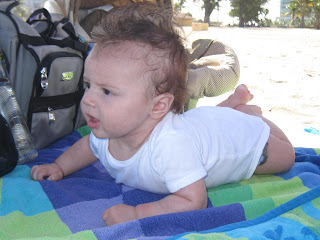 Unfortunately we had to leave early because Sam got sand in his eyes and took it badly. Poor baby. I don't remember this happening with Charlotte but I'm sure it did.

We got home by 1:30, got Charlotte to bed for her nap immediately and then two hours disappeared with various chores and Sam didn't want to be put down. Dinner was started at 3:30 or 4 and the turkey went in at 5:18. I suddenly realized we had skipped lunch and that it would take 3-4 hours for the turkey to be done which meant eating at 8 0r 9. Fortunately I had planned ahead to make Fettuccine Alfredo.

The dish went badly, Parmesan refused to melt into the heavy cream and stayed the consistency of gravel. I've made this dish over 100 times, how could if fail me now? I finally settled for rice and spicy shrimp as a snack/early dinner.

When we finally got the food served at 9pm, it was definitely worth waiting for:
Simple but very delicious and for dessert, Triple Chocolate Pumpkin Pie.
Posted by R. Molder at 5:41 PM

Email ThisBlogThis!Share to TwitterShare to FacebookShare to Pinterest
Labels: Thanksgiving

Yeah for an involved and interested husband. Isn't that a good feeling? My husband doesn't read everything I write, but it sure feels good when he does. I guess it is validating.

Hey, there! To my dear dear friend who is definitely on my thankfulness list! oxox

I love, love Sam's little mohawk in those pictures. What a cool little dude he is becoming since I visited you! Wow! Charlotte dear is looking cute too! Love the picture recap.

Happy Thanksgiving to you and yours. I am thankful for your love, support and wonderful friendship. You and your family are so special to me.

I would have gave in and skipped right to dessert. THAT sounds awesome.

Love the beach photos and 4 months already! NO way.