This fun blog hop brought to you by "The Un Mom", head over and check out her super cool graphics.

Hey Tuesday’s back and I’m still pregnant! That’s a good thing and here’s a list of my top random moments.

I only have 3 weeks left and last night a wire popped off the back teeth. Going this morning to get it reattached.

A new word I came up with yesterday. Charity + Generosity. Normally I hate word combos but this one just sorta manifested itself while I was in conversation with boss. He just looked at me like I had two heads.

Is going well for Bubbles the Powerpuff Girl. put her here several days ago and she hasn’t moved. I guess it’s a good thing hasn’t learned to use the potty yet! 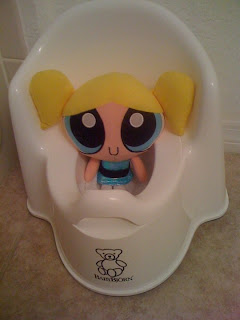 We are looking at mini vans and need suggestions!!! What is your opinion of the mini van? Would you ever own one? Do you own one and love it?

Full size mini van – husband wants this b/c he thinks the modern mini van looks like an SUV (which he hates), so he wants a “unique” style. So far he’s shown interest in any VW but they stop selling them in ’04, the Oldsmobile Silhouette when it looked like a dustbuster, Toyota Previa because they look like giant jelly beans. I’ve objected by saying it’s too big and I’d likely crash into things on a regular basis.

If we do get a “normal/modern” mini van he’s threatening to paint it bright orange with racing stripes. Or sky blue because how many do you see these days.

Clearly we have a van crisis – or a mid-life crisis for husband.

How did the ladybug get its name?
A. In Europe, during the Middle Ages, insects were destroying the crops, so the Catholic farmers prayed to the Virgin Mary for help. Soon the Ladybugs came, ate the plant-destroying pests and saved the crops! The farmers began calling the ladybugs "The Beetles of Our Lady", and they eventually became known as "Lady Beetles"! The red wings represented the Virgin's cloak and the black spots represented her joys and sorrows. They didn't differentiate between males and females.

In regards to your car issue, I was really interested in a Honda Element or a Subaru Forester. They are both roomy and tough! You may want to test them each out, because I have heard that the Element is difficult to get car seats in the back...

In regards to your car issue, I was really interested in a Honda Element or a Subaru Forester. They are both roomy and tough! You may want to test them each out, because I have heard that the Element is difficult to get car seats in the back...

i LOL'ed at the powerpuff girl potty training. that's great.

and yeah, i think summer blogging is slow, plus i think a lot of the blogs that were growing last year are really starting to slow down. life gets busy!!

Glad to hear about the braces. Three weeks! That's great!

As far as potty training is concerned. I have a few thoughts since I have survived this stage twice now to tell about it. One, use M&Ms, stickers, McD's Happy Meal toys or whatever floats her boat to incentive her into going. Also, pull-ups are just over-rated diapers. Plus, they are expensive. If they look like, feel like, hold urine like... they are a diaper. I am not planning on using them with my third. Throw these words back at me if you hear I am heading towards pull-up city. I am not a fan. Also, just be patient. This is a difficult stage. I have a niece that held herself for hours because she was being stubborn and didn't want to go. They will pull out the worst tricks sometimes to fight this stage. However, you and she can do it!!

We have a Oldsmobile Silhouette and like it. We had a Chrysler Town and Country before it and hated to see it go after someone rear-ended me. :( If you or Mike wants to call at anytime to pick our brains about vans, feel free. We would be glad to help. We have had our vans since 2001. And as far as the looks, you just have to embrace the fact that your family is growing and you need to get a van. Vans are not that attractive and they holler, "FAMILY HERE!!!". But, what are you to do? Room is needed.