I love pumpkin pie so imagine my horror upon discovering a Pumpkin shortage!

At Publix the store manager shook his head saying "no idea when it's coming in". Research online showed there had been a bad crop of pumpkins and distribution was scarce! Oh the horror!!! Halloween and Thanksgiving without pumpkins is like Christmas without Santa and presents!!!

I then made it a quest to visit every grocery store in the area looking for pumpkin cans or whole pumpkin. I tried specialty markets, Wal Mart markets, Whole Foods and finally found a small selection of whole pumpkins at Winn Dixie! I swear angels were singing as I selected one beautiful pumpkin.

I've never cooked a whole pumpkin before so internet research led me to Martha Stewart Recipes which was very handy in learning how to make Pumpkin Puree. I believe this recipe was referring to small pumpkins whereas ours was 10lbs so we cut it in 1/2 first, then in quarters. Husband wanted to remove all the skin which I adamantly refused to do - my pumpkin, my rules. Get your own pumpkin if you wish to deviate from the recipe!

We accidentally let pumpkin overcook for 45 minutes so it was a little crispy on the edges. After cooling for one hour, I scooped the pumpkin off the skin, ignoring husbands snipe that it would have been easier to cut off the skin from the beginning. While manual labor is appreciated, verbal feedback is not. We then proceeded to shovel pumpkin into food processor for the next 1/2 hour. End result is enough pumpkin puree to make 6 pies, cost of Pumpkin $6.00 so cost per pie is $1.00.

For the pie, Libby's pumpkin pie recipe was used and the end result is wonderful. Taste is almost exactly like Libby's and the only difference is theirs seems to have a brighter orange color. I do think it could use a tad less sugar so next pie will try 2/3 cup vs 3/4.

Very pleased with self and to top it off, baby likes pie! Here is photo of her playing in the Wok while pie is assembled. 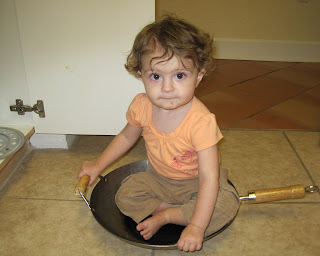 Thanks for the heads' up on the pumpkin shortage round these parts. what i don't like about living here in Florida is...where are the real pumpkin patches? we used pick our own pumpkins at real farms up in michigan. i wish my kids could have that experience! i guess you trade one thing for another, eh? so. now that I know there is a pumpkin shortage i'll pick up the first one i see. you're right. i haven't seen a single pumpkin yet now that you mention it and at merely a month out, the place is usually brimming with pumpkins by now!

I'm starting to see more pumpkins in stores this weekend, still no pumpkin cans in Publix though. I also wish there were pumpkin patches down here, guess I'll have to plan trips to the north for fall events!

We had some weird weather here in the Midwest this summer, and I'd heard that a lot of pumpkins rotted on the vine.

My parents didn't like pumpkin pie, so I didn't taste it till I was in high school, at a friend's house. I was an instant convert! Now I look forward to it all year.

I'm so impressed you used a whole pumkin. I haven't been that brave yet.

I love Pumpkin Pie, it's the ultimate comfort food so I kinda panicked over the shortage and overcompensated a bit. It's just so hard to imagine life without food available on demand!

You amaze me! I am impressed with your cooking/baking skills! Good job. Now, send one of those pies this way! LOL!