Why DID Mary get on that donkey 8 months pregnant? 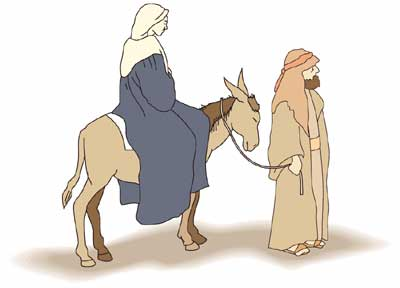 Being 8 months pregnant in the month before Christmas has made me painfully aware of what Mary must have gone through to have baby Jesus in Bethlehem.  The aches and pains at this stage can be tremendous along with going to the bathroom once an hour and feeling like labor could start at any moment with all the Braxton hicks tightening my tummy.  It makes a mama want to take it easy and stay home!  So what caused Mary to get on that donkey at this late stage in her pregnancy?
Luke 2:1-5
And it came to pass in those days that a decree went out from Caesar Augustus that all the world should be registered. 2 This census first took place while Quirinius was governing Syria. 3 So all went to be registered, everyone to his own city.
4 Joseph also went up from Galilee, out of the city of Nazareth, into Judea, to the city of David, which is called Bethlehem, because he was of the house and lineage of David, 5 to be registered with Mary, his betrothed wife, who was with child. 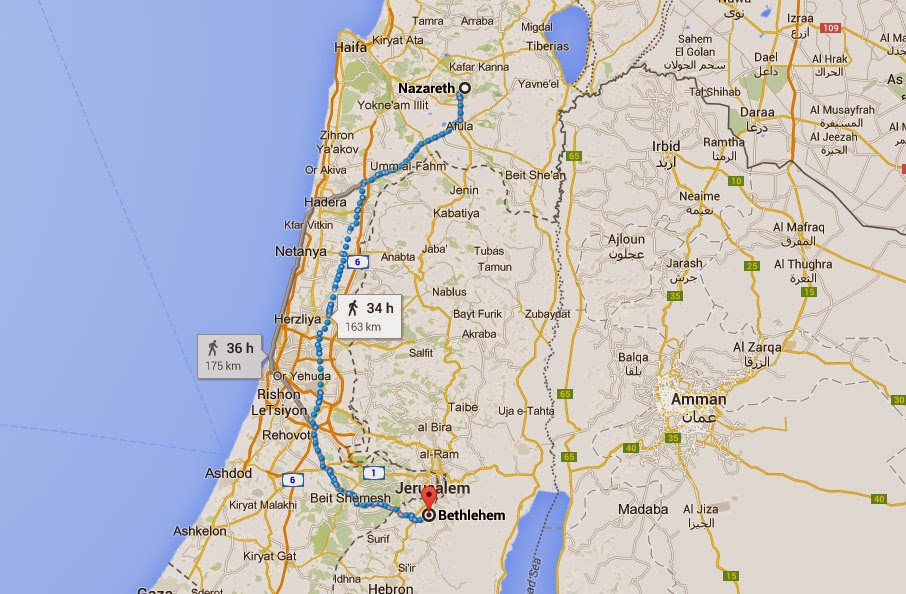 ﻿
Here is a google map showing the distance to be 36 hours of walking so it would have taken them 3 days if they walked 12 hours per day.  (However, studies suggest it actually took 70 hours of travel due to political boundaries and ancient roadways.)
There is no specific mention of a donkey in these passages but I'm going to assume that this made it into the story because the idea of a pregnant women walking this far is hard to imagine.  (And no husband in his right mind would let his wife walk that far anyways.)
Once they arrived in Bethlehem the story goes they could not find room at the inn and were given what we assume to be the stable to spend the night since she placed Jesus in a manger after birth.  Definition for manger is a feeder that is made of carved stone, wood, or metal construction and is used to hold food for animals.
Luke 2:6-7
So it was, that while they were there, the days were completed for her to be delivered. 7 And she brought forth her firstborn Son, and wrapped Him in swaddling cloths, and laid Him in a manger, because there was no room for them in the inn.
Can you imagine not finding suitable accommodations after a week of hard travel?  Some people suggest they could have been in Bethlehem for a period of time before having the baby but that would mean living in the stable during that time.  I'd like to believe the story goes more like the traditional tale which suggests that she gave birth right after settling down in the stable.  Otherwise she'd have had weeks to fret over the potential of being stuck there for the birth!  Can you imagine the stress of asking your husband every day - did you find a better place for us to stay yet?  Sorry Mary, Bethlehem is just packed and there is nothing left!
We can only hope that after the birth they were able to find better housing because they had 40 days post birth to complete the circumcision, naming and purification.  Leviticus 12:2-4 provides the details of post birth requirements.  Plus we don't know how long it took to be counted for the censes.
In Luke 2:39 we learn the family returned to Galilee, to their own city of Nazareth.
Luke 2:39
39 So when they had performed all things according to the law of the Lord, they returned to Galilee, to their own city, Nazareth.
﻿
Luke skips over the 3 wise men's visit but we can pick this up in Matthew where we learn the wise men go see Herod first to inquire about Jesus King of the Jews and then the star leads them to the house where Jesus and family are living.  We can only assume, based on the above verse in Luke, that they must have traveled onto to Nazareth.
Harod, feeling threatened by this young King of the Jews, makes a horrific decree to kill all male children under the age of 2 in Bethlehem.  Immediately after the wise men visit Jesus and family, an angel spoke to Joseph in a dream telling him to flee to Egypt immediately with his family where they stayed until Herod's death.


13 Now when they (wise men) had departed, behold, an angel of the Lord appeared to Joseph in a dream, saying, “Arise, take the young Child and His mother, flee to Egypt, and stay there until I bring you word; for Herod will seek the young Child to destroy Him.”


14 When he arose, he took the young Child and His mother by night and departed for Egypt, 15 and was there until the death of Herod, that it might be fulfilled which was spoken by the Lord through the prophet, saying, “Out of Egypt I called My Son.”


That's a lot of travel for a young family just starting life together.  I can only imagine they must have been very dependent on God to meet their needs because even moving that much in this modern age would be daunting.
There are so many lessons one can pick up from this story but as a mom who is 8 months pregnant, I take away the following:
As parents, it's so interesting to consider what Mary and Joseph went through.  My husband and I discussed a scenario of how would we react if God came to us in a dream and said pack whatever you can fit in one vehicle and leave Hagerstown, MD tonight, oh and you're going to be gone two years so trust that I'll meet your needs.  We'd probably be completely overwhelmed!
In this modern age, we have so many ways of maintaining strict control over our lives that it's easy to be lulled into thinking we are in complete control.  Need a car, just take out a line of credit.  Need food, call any number of fast food places and have it delivered.  Get sick, go to the doctor and get meds - except in my case where being sick during pregnancy means very limited options so you better believe I've been praying every day for recovery!  So there are exceptions when it hits us that we can't resolve things on our own but you can see how easy it is to largely live our lives without giving any consideration to God's will.

I think this is a good time to pause and consider just how much we really should feel dependent on God for our present lives and future.  Even Jesus had to depend on the guidance of his heavenly father.  Think about it - Jesus didn't come to earth as a God, he came as a human and therefore was solely dependent through his parents as a young child to follow God's direct will.  As an adult we see Jesus praying constantly for guidance.  Why then should we do any differently?
Posted by R. Molder at 9:15 PM

Email ThisBlogThis!Share to TwitterShare to FacebookShare to Pinterest
Labels: Faith