1. Two solo flights with a one year old
Surprisingly going & returning flights were each delayed two hours, a fact that almost sent me into panic mode because I'd timed her naps to the original fight time but found myself desperately hungry (probably due to stress) and had a chance to eat at the airport before launching myself and baby through security and into confined seating of plane. Miraculously she delayed her nap time and slept on both flights!

2. A reunion of family I haven't seen in 5 years
We picked up my 94 year old aunt from the nursing home and put her in the back seat with Charlotte. Surprisingly, baby was pleasant for the hour drive! While standing in line for food, the host sprayed a can of bug spray around the perimeter of food - nothing like bug spray on your picnic food! I don't remember much after that point until an aunt relieved me of Charlotte who shockingly sat quietly with her for an hour.

3. A trip to my mom's church
Not surprisingly Charlotte had a little too much fun (more on that in the post below)

4. Sunday with my family and two 9 year old second cousins
This day was particularly exhausting. First church, then lunch where baby got overwhelmed with 9 people at the table. I only remember wolfing down my food while holding Charlotte and leaving to changing a dirty diaper or maybe it was giving a bottle while everyone had dessert. Fortunately they saved some for me - my aunt's blueberry cobbler is NOT something to miss!

After lunch, Charlotte took a two hour nap during which I played Monopoly with two 9 year old second cousins, first cousin and brother - I can't begin to describe the chaos that ensued. My brother and I are Monopoly sharks but no one else had a clear grasp of the rules so the entire game was spent with our tutelage. I think with all the shouting I'd have preferred a nap with Charlotte. I remember telling one 9 year old he would lose a turn if he continued belching.

Once Charlotte woke up my stress level sky rocketed as both boys insisted on holding her, giving her a bottle, playing with her, etc! She didn't want to have anything to do with them and tried repeatedly to escape. Poor baby, we lead such a quiet life down here in South Florida, this was most unexpected. I thought 9 year old boys would be slinging mud and balls at each other - well the latter did happen but I wasn't expecting they'd both be so sweet and wanting to spend time with the baby.

Despite it all, my family is a treasure to be around and we'd love to have stayed longer. Also enticing is the soft grass, bunnies, squirrels and fire flies in my mom's neighborhood! How cool is that!?! 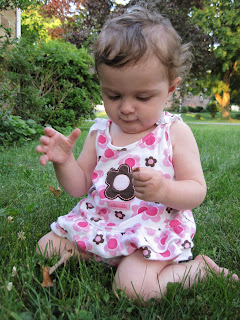 Another cute picture of her! So adorable!

Welcome home! Have I told you lately that you have the cutest baby south of the Mason/Dixon?

sounds like you got away with that trip! and i agree, she is really cute. she is possibly the cutest baby i have seen in a while!