My thoughts on Hurricane Irene
* Sure the news got a little hyper about the "potential" but at least they are taking the dangers seriously. Today writers are complaining that they bought too many supplies and are mad about the hype. But I remember watching Hurricane Katrina approach New Orleans in absolute horror. I've live through a Cat. 3 storm so could only imagine the dangers from a Cat. 5. I couldn't believe how relaxed the residents looked before the storm and the lack of preparations the city was making. So to watch New York shut down mass transit and give the public stiff warnings was gratifying. Thanks for taking the hurricane seriously guys. Side note, I don't watch TV anymore so was not privy to the constant battering of hype from our local corespondents, nor was I in New York where I'm sure the news hype was even worse. However, having lived through it myself, I've learned when to tune in and when to tune out. Listen for the facts, then be prepared with enough supplies to ride out the potential damage.

Men in Black 3
* Apparently I'm the last to learn of this movie in the making!!! So.Excited!!! Personally a huge fan and even bigger fan of the short in front of part 2 called "The Chubs Chubs Are Coming". Which can be seen here on You Tube! http://youtu.be/wzqi1bfflDg

Library Books
* A while ago, I thought it would be a good idea to save money and check out a library book. Not only have I NOT read it, I bought the books I really wanted. Now it's overdue. Fail.

Sam
* Is 13mo today. Knows how to stand on sister's bed and turn lights on and off. A useful tool when trying to prevent mom from cleaning.
* Continues to think big sister will someday help him in his attempts to communicate with us. Does not realize her squeals of "get Sam off me" are not invitations.
* Is displaying affinities for certain foods and refusal for others. Common technique for his age but prior to this was eating everything in sight.
* Enjoys a good game of Peek-A-Boo 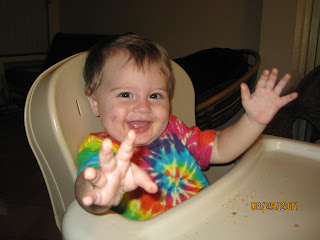 I'm such a hurricane snob. We lived through Andrew (a 5) so I'm not impressed with ones. But I so feel bad that they got it, regardless. Happy Tuesday!

Thanks Allstarme! I have to agree with you on this one!!