I'm exactly 2 weeks late writing this post. My daughter was born on June 19th, 4 weeks and 4 days early! As you can imagine, I've been in quite a tailspin. It's one thing to be caught unprepared for a babies arrival considering I'm a new mom and not used to getting up every 3 hours and sleeping in 2 hour intervals - if I'm lucky - but my little daughter decided to come very early!!! So early we had not set up the babies room with her furniture, so early I had not washed her clothes (but had spent the previous weekend unpackaging them - which took hours!!!), so early I had not packed a bag for the hospital, etc etc etc.

For those who love the details, here is what I wrote while in the hospital:

I woke up at 5am to use the bathroom, routine stop. The only thing unusual was that I had only woken up twice that night but then again I did go to bed at midnight so maybe I was just really tired and slept well. Most nights I had been getting up every hour.

Went back to bed and felt like I peed a little upon sitting down so went back to bathroom. Someone told me that in the last month it can be hard to hold pee in and that’s why you are supposed to do the kegle exercises - which I had done off-hand once a week maybe 3 times. Thinking this was a fine time to start but first needed to change the liner I returned to the bathroom. This went on 3-4 times until I returned to bed quite irritated with self and asked husband for towel just in case. He reorganized the bed and then snuggled behind me. Brave man. I lasted for about 20 or 30 minutes before feeling a large pressure against my bladder so assumed I needed to pee again. This repeated 3 times and progressively felt like cramps. At one point I went to the kitchen for yogurt because I was starving and felt lightheaded. The last cramp I confused with a bathroom break and while walking to toilet felt weak and lightheaded and almost threw up while on the toilet.

Tried calling doctor’s office at 7:30 because that’s when they open on Thursday’s but no one answered. Stayed in bed until 8 and finally felt slightly better but definitely not good enough to go to work. Ate a bowl of cereal, briefly wondered if I was experiencing something called Braxton Hicks that friend Gina was having recently. By 8:30 Husband was driving me to the doctor’s office and I texted my boss to say that I was not feeling well and going to the doctor’s office. We both left without showering, me wearing glasses. I read somewhere that your not supposed to wear contacts when giving birth so I thought on the rare chance I ended up at the hospital, I'd be prepared, plus it's my first step post shower. Might I just say it's extremely rare I'd leave the house without showering so I really thought I was just going in for a quick check up.

We arrived at 9am and waited for 45 minutes. I started falling asleep on Husbands shoulder while waiting. Once in the patient room, I striped at the waist (much to husbands amusement), midwife came in and asked a few questions about my morning and proceeded to check me for dilation. I swear her face expression did not change as she announced, you’re 3cm dilated and you’re going straight to the hospital. She left me to get dressed and I sat for a moment with jaw hanging, in shock. Husband went into mild shock.

Around 10:15, we left the doctor’s office for the hospital and I asked for a pit stop along the way at Barnes & Nobel for reading material. I figured hey I might need entertainment if they put me on a bunch of machines and monitor me all day. I actually walked into the store with a bad cramp - I tried to convince myself but it was most likely contractions - and went straight to the bathroom. Mike bought water and on the way out I grabbed a book - yeah I already knew it was there, I have my favorite authors book release dates in my phone calendar - I’ve been waiting for Marian Keyes book for quite some time, even considered ordering it straight from Amazon.uk but rationalized against the cost for postage. I actually had another contraction while paying for the book, that’s when I stopped deluding myself of the cramp part and as I’m trying to pay the woman gets really chatting and I’m just like “take my money damn it!”

On the way to the hospital I text my boss “3cm dilated, going to hospital”, the phone rings a second later. I calmly tell him it might be a false alarm or I’m going to have the baby that day. He says that’s fine and I sound great and very calm and to call back when I know what’s going on.

We get to the hospital around 10:30 or 10:45 and park really far from the entrance due to no parking, check in and get settled in a birthing room around 11:15. The nurse is 8 months pregnant like myself, she’s due July 24th, I’m “due” July 21st so it was some measure of comfort to know she had a good understanding of how I felt. I went to the bathroom before laying down.

Got hooked up to machines and she started monitoring my contractions (not cramps) and the first one on the screen I didn’t feel. The next hour they got a minute apart and got progressively stronger. At one point I looked at Mike and said with absolute certainty, this baby is coming in the next hour. He consulted with the nurse and she said she would be surprised if I had the baby before the end of her shift at 7pm.

The Premie doctor came in and consulted with us about the potential issues we could face by having the baby today, he wasn’t majorly concerned and was waiting for the doctor to make a decision on potentially delaying the labor with drugs, but if the benefits of delaying labor did not out weigh the benefits of having the baby, she would come straight over once I was further dilated.

Around noon, the nurse left to call the doctor with my stats and during her absence I used the bedpan twice, I swear no one told me contractions make you feel like peeing! It’s more annoying then anything. Maybe it has something to do with the instinct desire to push something out regardless of what it is or if it’s ready. It’s just this mental need to push and push and push!

By the time she got back the contractions had stayed 1 minute apart and gotten stronger. The IV drip didn’t slow them down as they had hoped. She did a vaginal check and found me to be 6cm dilated. She left to call the doctor again. Upon her return I was in full concentration mode, wait for beginning of contraction, breath through it, if it caught me off-guard I’d start gasping for breath mid-way. She came back after a 1/2 hour and did another vaginal check and I was fully dilated. Things went really fast from here. The clock showed 2pm. The nurse pulled out a bunch of paperwork and had me sign in between contractions. I might as well have drawn a line for the nonsense scribbled out,they wouldn't let my husband sign because it all had to do with emergency plans for removing baby. The room filled up with people. For every contraction, I had a room full of people telling me to not push. I assumed we were waiting for the doctor to show up.

Doctor got there surprisingly quick and suddenly I was allowed to push. Yeah, finally a release instead of clamping down on my vagina while trying to breath with the whoo whoo whoo every 60 seconds. The pushing was harder then I thought it would be. Every time a contraction would start, I would push for 10 seconds while Mike did the count down in my ear 3 times (10, 9, 8, etc). After the contraction I would fall back into bed and he would wipe my face with a damp towel and rub my back. Next contraction would start and I finally learned to take a deep breath, hold it and push until I was blue in the face and reached 10 seconds. At one point, between contractions, the doctor started a lively conversation with one of the nurses about a recent mission trip to the Dominican with her church. I actually enjoyed the distraction and found myself wondering what church she went to. Back on track to baby with die hard mission to get out of my body NOW! Was it something I said or ate, maybe that Philly cheese steak from last night was disagreeable? Back to pushing, Mike counting, wiping my face, feeding me ice chips, telling me I’m doing great, pushing, pushing, not feeling anything coming out but nurse and doctor are cheering great push keep it up. I do 2 more great pushes and liquid and baby rocket out of my body, I didn’t feel a thing at this point. I always thought it would feel shockingly painful when baby came out but not a thing.

Honestly the stitching was more painful then giving birth!

She cried a funny little cry of wah wha wah wah, short cries. It was so cute. For a 35 week baby she’s quite long, 19.25” and 5.6lbs. She has tight curls that are around 1” long and big feet! They finally let me hold her and she calmed down immediately. She has my face, my chin, lips, nose, not sure where Mike is in there but I’m sure we will see more of him in the days to come. Judging from the early arrival, she’s got my impatience.

Since giving birth I’ve been resting, relaxing and carefully going to the bathroom. Not going into details here, you birth mothers know what’s involved.

Friday - I haven’t seen much of baby but reports are she’s doing fine. I’m glad she being taken care of and hope I can take her home tomorrow. Everyone keeps telling me to sleep now, I’ll wish I did when I get her home and can’t sleep but I’m too wired to sleep. I got 5 hours last night and was restless after that. I tried to snooze today but I’ve had 8 or 10 hospital staff visitors. 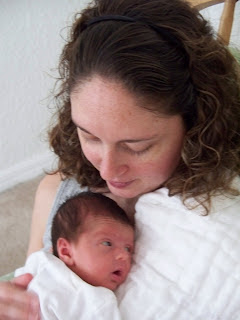 So glad for you and Charlotte that you wrote her story out. I still have to sit with hubby and get my kids' stories on paper. After two, my memory is a little hazy so I really want to get them down before this one is born.

She is an absolute doll! I hope all is well. If there is anything I can do, just call or write. I am happy to be of assistance.