Peppers  (shown below) - I gave up on these until husband suggested they need more heat.  After checking online, they need 85 degrees to germinate so I put them into a disposable cake container to help boost the heat and put them next to a window that gets the most sun.  Currently waiting for something to happen. 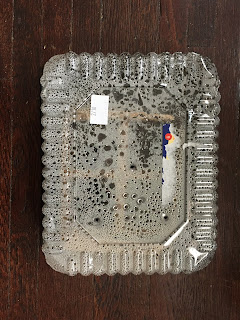 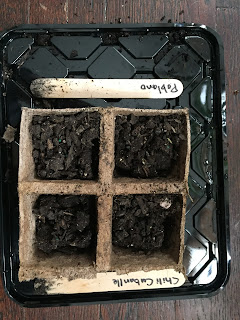 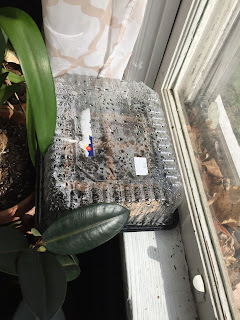 Beefsteak Tomatoes (shown below) - awesome progress, next step is to begin fertilizer once a week.  Around 4/19 we will check the roots and if they are progressing nicely we will replant them and back under the grow light until all danger of frost has past.  I've been following this video for reference.  Right now my only concern is to cut out the least performing seedlings because they all look great!

Pintos (shown below) - all 8 have sprouted!  You can see the first bean in the back of this photo with the tomatoes, I know the others have sprouted because I found roots on all and replanted them.  I had started 6 in an egg carton so they needed to move.  I used the egg carton so I could fit more plants on the plant shelf but once I have actual sprouts they become quickly too small and hard to keep moist due to size. 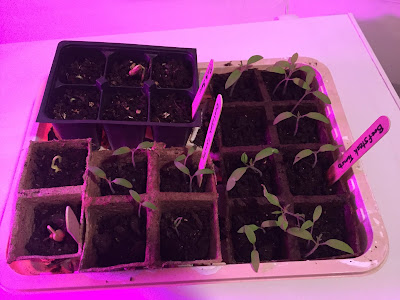 Mystery Plants (shown below) - these could be pumpkin, butternut squash or acorn.  They sprouted in our compost bin and why not take advantage of a viable seedling! 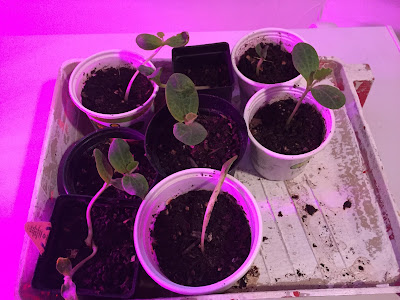 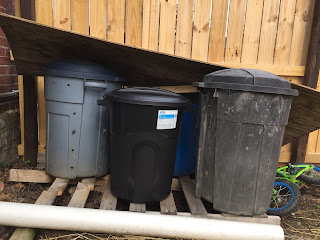 Butternut squash (shown below) - after further research, I've learned they need 95 degrees to sprout!  That's not going to happen in our 70 degree room, so I put them in with the compost that's grown other sprouts.  Even though it's 50 outside, the heat builds up inside this can.  They should germinate in one week.  Actually this compost can is ready to be sifted and spread over the garden but we'll get to that once I'm finished using it for a temporary greenhouse. 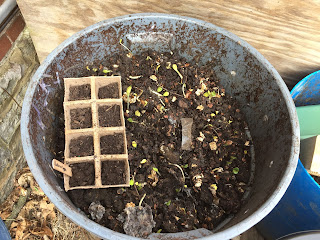 Roma Tomatoes (shown below) - have finally sprouted a tiny bit of growth.  I've moved them up closer to the light as they look quite skinny. 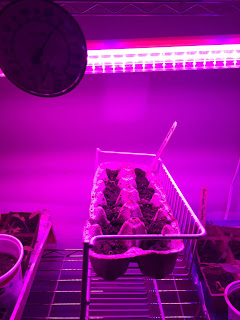 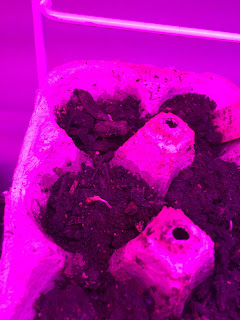 Lettuce, Red Bell Peppers, Carrots and Basil (shown below) - absolutely zero progress, all planted on 3/30.  Time to actually do some research and figure out what temps these guys need to germinate. 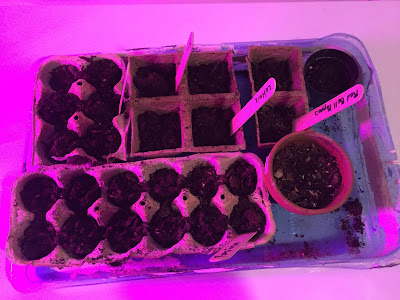 I check on the seedlings once a day.  I add water if the soil is dry.  Otherwise I've left them alone since planting.  Today is the most activity I've done since planting to check on germination temps and make adjustments - all which should have been done first but no harm done.
Posted by R. Molder at 9:00 AM