We skipped the 6 week follow up visit due to heavy snow and unpredictable roads, but we we're also tired of the constant discussion over Evie's eating habits and we were making good progress at home on her eating habits.  She was finally taking a bottle regularly in February and we had switched to Pediasure when she refused regular milk after turning one which provides extra calories.  Her diet consist of the highest calorie foods we can get her to consume, making sure every bite counts because sometimes she only wants to eat 10 bites so we show her the highest calorie items first.  She likes scrambled eggs with cheese, for 2-3 days and then doesn't want it anymore.  She'll eat bananas for 2-3 days and then not want any more so variety seems to be the key.

Her next visit was April 5th for her 15 month check up and we are thrilled to say the doctor was finally happy with her weight gain, she had gained almost 3lbs in 3 months.  We are now on a normal schedule of follow up visits!

As you can see from the chart below, she's still below the curve but the line direction appears on it's way to hitting the chart soon.  The doctor said to keep doing what we are doing and that's the best news I could have heard!  After the months of praying and working with her to eat we are so tremendously thankful for her progress.  This might be my last post on this subject.  I just wanted to write a series on this in case anyone else is struggling with this issue.  There is not a ton of support online and it's hard to know what to do in these situations because you can't reason with a baby.  You can't force them to eat when they don't want to.  It feels so incredibly helpless.

There are situations where medical intervention is necessary and I don't want my blog to be taken as a message of avoiding the medical care.  We had 2 prior girls who had followed the same track record so we were fairly certain that this was normal behavior for our child.  Our 2 prior girls had a pediatrician in Florida who was familiar with our family history and part of the problem with Evie's situation is that we had moved to Maryland and our new pediatrician did not know us.  If at any point we had been told to take Evie to the hospital we would have complied.  We are thankful our situation never came to that point and she was able to progress naturally. 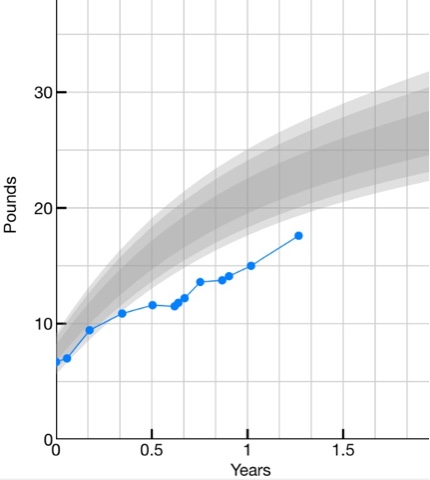