I'd like to give thanks that Thanksgiving is almost over! Not used to marathon cooking and truth be told was feeling a bit tired about the whole thing. I love the end result and not willing to eat out so I do this to myself every year but need to find a way to scale back. For example, it is not necessary to bake enough Sausage Cornbread Stuffing to last for 4 giant meals following Thanksgiving. Pie could have been cooked in advance, sigh!

Did I mention the vivacious 17 month old running us ragged? No wonder young parents run off to their parents to obtain the yummy goodness of Thanksgiving!

In between each cooking spurt, we played outside with our little darling. For our first walk she's decided to push her stroller rather then get inside. 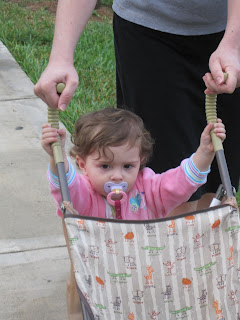 And later in the day we practiced saying "no, don't run out into the street" with the following result of laying on the sidewalk. 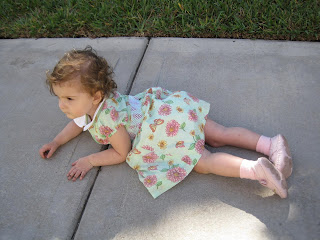 We played with the water pipes 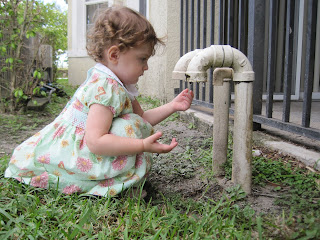 And finally at 8pm I can say I'm thankful babies go to sleep for 12 hours! I sound a bit haggard don't I? Tomorrow will be fun, no cooking AT ALL!
Posted by R. Molder at 9:34 PM

Email ThisBlogThis!Share to TwitterShare to FacebookShare to Pinterest
Labels: Thanksgiving

Rachel, I count you in a small group of precious friends that I thank the Lord for each year. You are very special to me. I am glad for each of our 18 years of friendship.