Today Charlotte and I tried a new park called “Sugar Sand Park” in Boca Raton, a wealthy district of South Florida. It’s a bit of a drive, 45 minutes but I thought the description would be worth it.

The Science Playground is a tri–level hands–on experience that features many interactive components demonstrating a variety of scientific principles for all ages. 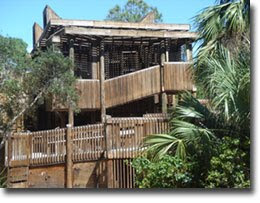 It also has a Carousel. 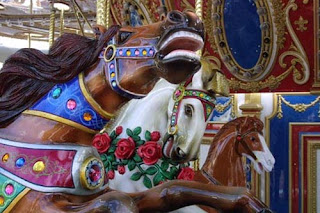 Apparently hundreds of parents with wild offspring had the same plan, it was like summer at Disney. I carefully maneuvered Charlotte into the Toddler section where she played for 45 minutes as I panicked every five minutes from seeing 10ish age boys run full speed through the toddler section. Shouldn’t there be a playground monitor? Something called their parents? A referee to say – okay now you can run through the entire fort but the toddler section is off limits!

The 5 year old boys were also obnoxious. I was sitting on a fence taking photos of Charlotte when one rude little boy clamors up beside me and sandwiches one foot between my butt and the wall. “Move” he says; I ignore him, pretend to be foreign. More forcefully he says “Move, I want to climb the fence”, more ignoring, finally in the background I hear a parent say “Damien, say excuse me”. To which I almost turned and said, “no excuse me, I was here first” but I moved. The child then proceeded to swing around the fence wildly. 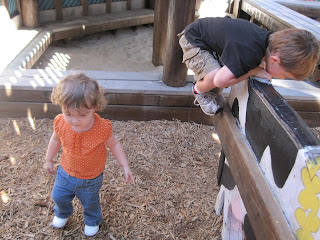 I believe the science aspect was limited to pictures of animals, a small sign discussing the virtues of solar energy and perhaps the various materials on the ground such as sand pits, mulch and other various earth bits and well the entire fort was made of wood so I guess a parent could teach materials. Anyway, if you want to learn about earth and fields I suggest you go to Grit's blog. 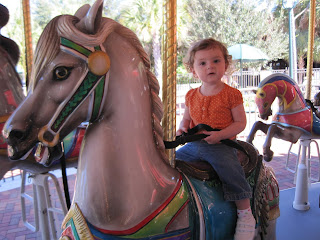 Not being one to boast that my child's perfect, here are a list of atrocities from the remainder of the day:

* Kicked and screamed as mom removed child from toddler playground
* Kicked and screamed during 2pm bottle so was put in crib to "chill"
* As fridge door swung open, child reached with lightning speed to grab a glass bottle which she then made eye contact with parent and dropped it straight on the tile, smashing bottle to smithereens. Was then placed in crib to cry and scream as debris was cleaned up.
* Was taken outside to visit with neighbors Chihuahua as consolation but around 6pm it got dark, was time for 6pm bottle so was taken back inside to the tune of kicking and screaming.
* Insisted on mom holding her during the entire assembly of Lasagna and upon completion sat quietly on floor with Pet catalog (couldn't possibly have reversed those two???)

I will never say MY child is perfect but will do best to make sure she has good playground manners as soon as possible. Regardless, our next trip to playground she might be wearing this: 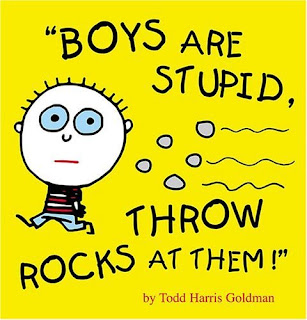 Which can be found here: http://www.davidandgoliathtees.com/product/DETAIL/3742

I am the mother of a wild two year boy.

It is quite an adventure.

I'm secretly glad the little one on the way is a girl. (I'm hoping she's slightly less wild.)

Hi K - I bet your little girl will be calmer. Even on Charlotte's most rambunctious days she's still calmer then the little boys I've seen at the park.

Also, I feel a little bad at saying boys are stupid, that sounds rude, I should really say boys are really wild and I'm terrified they will trample my daughter with their insane energy.

Unless she gets one like my boy. He would have rather sat and read books up until my high energy daughter was born. She is helping to encourage the boy in him, but she definitely has 2X the energy of him. :D However, she is never rude or overly wild.