The homeless guy who lived on Fort Lauderdale beach 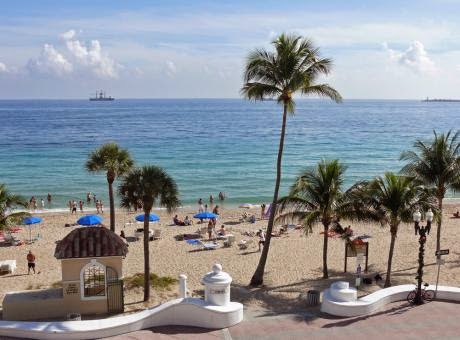 Husband and I moved to South Florida in the fall of 1998.  We had just left art school in Pittsburgh, a life of cold winter days, coffee shops and art galleries.  South Florida was polar opposite with it's hot humid days so naturally we switched hot coffee for cold drinks and got jobs at the Smoothie King on the beach.

Our Smoothie King was located directly under a premium gym where guys drove expensive cars and acted all knowledgeable about health products and such.  Parking was so expensive that you had to be wealthy to drive to the beach and park every day.  The irony is the drinks were so loaded in carbs that it was almost funny to mix up a 20 or 40 ounce drink for people who just worked out to burn the calories.  We had one drink that was almost 1000 calories!

Accross the street was the International Swimming Hall of Fame which hosted non-stop events around the year for swimmers.  We'd get kids of all ages marching accross the street for a "health" smoothie.

There was also the international crowd who worked the cruise ships and would bus into the beach for supplies and entertainment on the weekends.

The local kids employed at Smoothie King were an odd mix.  Some were from a nearby private school who were very lazy and would forget to do all their closing chores.  There was also a 16 year old girl who had false teeth and lived with her much older boyfriend.  There was Jill, a girl who's mom had ruined her credit by 16 and Debra, a local with lots of tattoos who got pregnant by 16 and raised the baby with her boyfriend.

Finally there were the homeless.

One man stood out from the homeless crowd because of his manners.  He'd come in to ask for a drink and always ready to pay $0.20 for the cup.  Our boss had befriened this man and learned his life story.  His name was Mike.  Mike had a family once, a wife and daughter, both were killed in a car crash and Mike never recovered.  He used to have a good job but could not function after the death of his family and he turned to drinking.  We knew if we gave him money he would buy alcohol so we simply tried to be kind to him.  We'd talk to him whenever he stopped by, always gave him water and food if needed.  But it still came as a great surprise when we heard one day that he'd passed away on the beach.  With an unexpected death there is always that thought of, what more could I have done for this person?  Yes I tried to help, but could we have done more?  Death is sad no matter when or how it hits, but always more so when it's unexpected.
Posted by R. Molder at 11:46 AM

Email ThisBlogThis!Share to TwitterShare to FacebookShare to Pinterest
Labels: Florida