Has anyone ever placed an order online then wondered a week later where it was only to go back to the website and realize you forgot to pay for it? Yeah me neither. 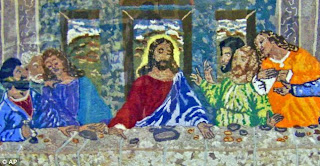 From the home front, every night Charlotte does her goodnight rounds with a kiss for every person and animal nearby. Tonight it was -
I believe we have just entered the Jetsons age! Now if husband could only figure out how to add a voice chip that says, "good. night. charlotte", in Steven Hawkins voice since I imagine all computers sound like him.
Posted by R. Molder at 7:28 AM

I have a new-found respect for lint.

Stopped over from Keely's. That woman is amazingly clever.

I have a bag of lint. I save it for camping. It makes great fire-starter. Is wondering what I can do with it now. Hmm... And I wonder if she had to dye it or if she dried her orange clothes by themselves. That's some bright orange lint. The whole picture is amazing!

Charlotte is so cute. Please bring those kids up here sometime. I miss them and you!

That woman had to think about her laundry entirely too much. Or she just had too much time on her hands. The picture is cool, but really kind of creepy too.

Lint? Someone had lots of free time!!

At least it was dryer lint and not belly button lint, right?